When doctors speak of Helicobacter Pylori Eradication, they mean just that- eliminating the stomach bacteria so that antibodies no longer show up on a H Pylori Blood Test or H pylori stool test. Helicobacter pylori, most commonly known by the abbreviation H pylori is a common stomach bacteria that has been infecting humans for tens of thousands of years and affects almost half of the world's population.

While many people live with H pylori without it causing them any problems, Symptoms of H Pylori can affect someone at any time- whether it's from a newly acquired 'Acute' infection, or a worsening of a 'Chronic' infection that has affected that person for years and maybe even decades. When H pylori begins causing symptoms, then doctors will often choose Helicobacter Pylori Eradication with a combination of antibiotics and a specific type of antacid called a 'Proton Pump Inhibitor'.

While this combination is the 'standard of care' for Helicobacter Pylori Eradication, the effectiveness of this triple antibiotic therapy very often doesn't do its job and the infection remains firmly entrenched. When it was discovered that ulcers and stomach cancer were actually caused by the H Pylori Bacteria, doctors quickly saw the advantage of being able to treat this infection with antibiotics- and so they did. But the H Pylori Bacteria is made of tough stuff and, like the problematic infections of MRSA and C Difficile Infection, began to become resistant to the antibiotics being used. Helicobacter Pylori eradication then became a LOT harder.

The Maastrich III Consensus Report, drafted in the year 2000, was the cutting edge 'Standard of Care' at the time, but that was 10 years ago and the Helicobacter pylori bacteria isn't listening to the Maastrich Consensus as much as doctors would like it to. Because of all of the studies that have been done, scientists know EXACTLY how well Helicobacter Pylori Eradication works- and it's not so great. We think that when doctors give antibiotics, the bacteria dies and you are cured, but H pylori eradication failure is between 20 to 35%, depending upon who you talk to. This means that when your doctor pulls out his prescription pad and tells you to take those antibiotics to get rid of your H Pylori Infection, the odds are that between 2 to 3 people out of every TEN will NOT have eradication of H pylori!

Additionally, the Side Effects of Antibiotics can be OTHER, sometimes worse infections like C-Difficile Infection and Intestinal Candida Symptoms. Since the failure rate for H pylori eradication is so high, it's entirely possible to gain one or two infections, and not even eliminate the one that you originally took the antibiotics for! What a mess. Yet this is 'standard' for the treatment of H pylori. It's to avoid these problems, and to overcome the failures of H  pylori so it can be eliminated the first time that I wrote the book The H Pylori Solution.

Why Does Eradication Fail?

Most doctors and researchers will tell you that eradication failure occurs because the bacteria become so resistant to antibiotics so quickly that antibiotic resistance causes eradication failure and if only we had better antibiotics, this would reduce the failure rate. While this is definitely true, it is only PARTIALLY true; there is another factor that doctors simply don't take into consideration when they evaluate H pylori eradication failure. And that factor is the health of the immune system of the PERSON who has an H pylori infection in the first place.

While traditional doctors almost never take this into consideration when they determine H Pylori Treatment, alternative practitioners very often do and their belief in taking time to strengthen the Immune System BEFORE treating the H pylori was confirmed in the study Impaired Host Immunity Contributes to Helicobacter pylori Eradication Failure. You see, antibiotics don't kill off every single organism even in the best of circumstances. For full H Pylori Eradication, your immune system has to 'kick in' and kill off the leftover weakened organisms. A poor immune system is not going to be able to fight off even the weakened bacteria- and H pylori eradication failure will occur over-and-over again.

So, not only is the strength of your immune system IMPERATIVE in order to get rid of H pylori in the first place, but to also KEEP it away. Since H Pylori is Contagious, if you get rid of it and get exposed to it again with the same immune system problems, you'll likely just get reinfected! And since other people in the same house are often 'asymptomatic carriers', they can give it BACK to you if your immune system is not strong! So, it pays to strengthen the immune system before and during the time that you are trying to eradicate H pylori. This is the basis of the book The H Pylori Solution, a step-by-step program to eliminate your H Pylori once and for all...

Have a Question about H Pylori?

Do you have a question about H Pylori? Ask your question here.

Click below to see already answered questions about H Pylori?

H Pylori for the Past Two Years
I have been suffering from stomach pain and heart pain since 2 years and 5 months back doctors found h pylori by doing some air blow test. i took anti …

Hey pylori difficulties
I was diagnosed with H pylori. I took the medication the doctor prescribed. I'm still suffering. I went from 125 lbs now to 94 lbs. I am unable to keep …

Reoccurring H Pylori
My sister was diagnosed with h pylori over 2 months ago she was given antibiotics to kill the infection. After she completed the course of antibiotics …

Back to Top of Helicobacter Pylori Eradication 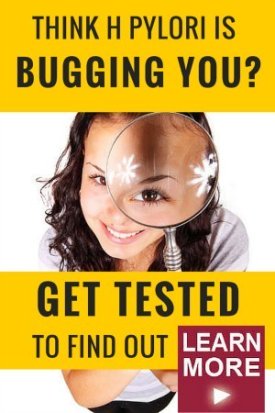