MRSA
Are You Helping to Create
An Epidemic

Have you heard of MRSA yet? If you haven’t, you will - soon. MRSA (pronounced Mersa) otherwise known as Methicillin Resistant Staph Aureus, Staph Infection, or Staff infection - is on the rise. Just like tuberculosis and vancomycin resistant enterococcus, methicillin resistant staph aureus is one of many Multiple Drug Resistant Organisms that has come into our world in recent years. It is a deadly organism, a bacterium that has been created by man.


Methicillin Resistant Staph Aureus was unintentionally created, but not unexpectedly. Penicillin, invented in 1928, was the first antibiotic. Before that, we had no drugs that targeted bacterial infections and people were treated with supportive measures like rest and fever control. Along came Penicillin and the medical world changed drastically. For the first time, bacterial infections could now be CURED!

And cured they were. Penicillin was used to great success in World War II treating wounded soldiers and became known as a miracle drug. Four years after it was mass marketed, it developed its first resistant organism, the precursor to our current methicillin resistant staph aureus. Resistance occurs to a small degree EVERY time antibiotics or antibacterials are used, and the resistance is worse when the person doesn’t complete their entire regimen. At least some bacteria are left alive each time antibiotics are taken. 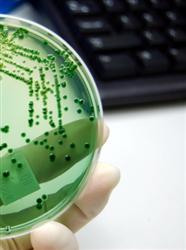 "The adaptive strategies used by microorganisms to survive
hostile antibiotic environment
are remarkable in their
evolution and complexity."
-'Antibiotic Resistance:
A Survival Strategy'Sheldon, Albert T Jr.

Antibiotics tend to kill the weakest organisms, leaving the strongest and hardiest to flourish again.

At times, antibiotics barely touch the organisms themselves. Many bacteria form colonies in which they collectively produce a slimy coating, called a biofilm.

This biofilm coats the entire colony as a protective barrier.

One study showed that individual bacterial cells were 15 times more susceptible to the antibiotic tobramycin than were cells in biofilm colonies.


Bacteria can communicate with each other readily in these communities and studies have shown the bacteria like MRSA can collectively 'turn on' different genes that evade antibiotics in several different ways - such as producing a greater volume of mucus slime!

When these stronger organisms infect the same person or get transmitted to another person who gets treated with antibiotics, the pattern is repeated. The strong survive and the biofilms 'learn' to evade the antibacterials. These live to infect again and again - and a drug resistant organism is born!

Each year, over 100 million prescriptions are written for antibiotics. The CDC estimates that 1/3 of these are unnecessary. Antibiotics ONLY treat bacteria, yet we have been taught that if we get ‘sick’, we go to the doctor, get antibiotics and get ‘better'.

This is so ingrained into our culture that we pressure doctors to give us antibiotics even if we only have a cold. Doctors want to make us happy and many (but not all!) comply with our requests instead of using the opportunity for education.

• 80% of ear infections in children will resolve without antibiotics

• 80% of sinus infections will also resolve without antibiotics

• Antibiotics are useless for colds and upper respiratory infections

Yet doctors still prescribe antibiotics almost 1/2 of the time for these common complaints!

Farmers are another problem

Antibiotics are added routinely to animal feed in the US in order to make animals grow fatter and faster (as an aside, it makes you wonder, if they make livestock fat, then what are they doing to humans?). They are also added to prevent infections from the crowded and unsanitary conditions in most mass production livestock facilities. This well-known effect has caused the farming industry to use almost
27 million pounds of antibiotics each year, only 2 million of which was used to treat sick animals!

And these antibiotics don't go away once the animal has taken them. These medications get transferred to us in small doses each time we eat these animals, killing a certain amount of bacteria in the process and creating further resistance.

Why should that worry us? 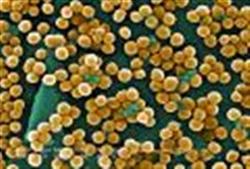 New antibiotics are not created easily. FDA approval is required before any drug goes on the market in the US. This process can take up to a decade and $800 million for EACH drug! And resistance outpaces the creation of new antibiotics. The result is a lot of older drugs that don’t work against infections like Methicillin Resistant Staph Aureus any more.

This is becoming a MAJOR problem, some even going so far as to call it a pandemic.


According to the CDC, each year in the US:

There are distinct differences between the two, with young healthy people being affected more by CA-MRSA than older unhealthy populations. The community acquired strain of

MRSA usually shows up as severe skin infections that may be difficult to treat and often gets passed between people living together rather easily.


While not nearly as deadly as hospital acquired MRSA, it too is a serious problem. Ironically, the same advice that is given to prevent it is the reason that we have it in the first place – cleanliness. Our obsession with personal hygiene causes us to wash our hands with antibacterial soaps constantly and to disinfect everything that anyone touches.

And in this process of disinfection, some strong germs are always left over to thrive. In places like gyms and public restrooms, disinfection of surfaces sometimes happens hundreds of times per day allowing Methicillin Resistant Staph Aureus to grow. Ironically, this process does not occur with soap and water because the organisms are simply washed away.


What can we do

• If you are sick and antibiotics are prescribed, ask your physician (or search for yourself) to see if there are any alternatives you can try

• If you do take antibiotics, take the ENTIRE course and do not stop because you ‘feel better’

• If you do take antibiotics, consider taking probiotics during and after in order to reduce side effects like yeast overgrowth infections and diarrhea, and to replace the good bacteria in your gut that are killed whenever you use antibiotics.

• If you must use disinfectants, use disinfectants that don’t encourage resistance like: soap and water, alcohol, tea tree oil, thymol and even the extracts of Some wildflowers have antiinfective properties against MRSA

• Realize that infections are a failure of the immune system to combat these organisms.

Back to Top of MRSA Page