Except in a few very specific incidences, like after a heart attack or when the sufferer is very old, the causes of congestive heart failure are usually termed ‘idiopathic’ or 'congenital'. These are medical terms meaning that doctors have done their best to look for WHY the person has the problem, but they can’t find anything. They simply call it idiopathic or congenital heart failure and they don’t HAVE to look any more.

After the first initial laboratory tests, no one is particularly concerned about the causes of congestive heart failure- even though its likely that you’ll be back in the hospital 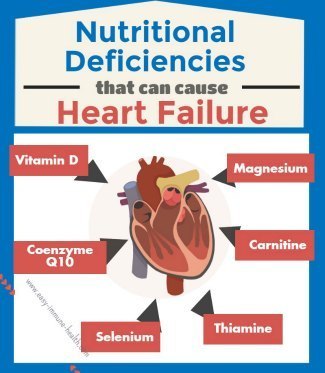 "Nutrient Deficiencies Can Be
Causes of Congestive Heart Failure"

over and over again with ‘water on the lungs’ and shortness of breath. But what if there really ARE significant causes of congestive heart failure that doctors just are not bothering to look for?

Can Nutrient Deficiencies be
Causes of Congestive Heart Failure…

While it’s likely that your doctor will answer that with an unequivocal “NO”, or he might say that eating right or avoiding salt will help, that answer is NOT AT ALL based in science- and MANY people whose Death Was From Congestive Heart Failure could have been saved with specific nutrients. And in many a Congestive Heart Failure Case Study, people who were DYING because of these problems COMPLETELY RECOVERED with the administration of the specific nutrients that the person was deficient in. That means that in some cases, nutrient therapy is the ONLY effective treatment for life-threatening congestive cardiac failure.

So, Which nutrient deficiencies could be congestive heart failure causes?

Probably one of the most common causes of congestive heart failure and cardiomyopathy that is NOT looked for is Vitamin D. Really! Congestive cardiac failure, ‘idiopathic’ cardiomyopathy and Pediatric Congenital Heart Failure COULD simply be a symptom of Vitamin D deficiency. There have been MANY noted cases of congestive cardiac failure where the people COMPLETELY RECOVERED when the vitamin D deficiency was discovered and treated!

While it sounds miraculous, there is a very good reason that Vitamin D Deficiency should be considered in ALL cases of Vitamin D Deficiency. The heart muscle relies on Calcium for its proper functioning and you can’t absorb calcium without Vitamin D. So, while Vitamin D is the treatment for congestive heart failure in these cases, the Vitamin D actually corrects the CALCIUM deficiency.

Carnitine is another one of the causes of congestive heart failure and TREATMENT for it as well! In fact, carnitine deficiency has been found to be a MAJOR cause of heart failure in ‘familial’ cases of Pediatric Congenital Heart Failure. But usually doctors don’t suspect this until one or more of the patients siblings have already died from it! The reason that it is ‘familial’ is because there ARE some families with a ‘quirk’ in their ability to metabolize this ‘conditionally essential’ amino acid.

Usually we can make carnitine from 2 other amino acids, but these people can’t. And carnitine is an essential mediator in getting ‘food’ into the individual cells where they can use the food to produce energy. This means that without carnitine, your cells –including your heart cells- can’t make enough energy to do their job. And that’s bad news for those with ‘familial’ cardiomyopathy unless an astute doctor finds carnitine deficiency.

In many of these cases, if the condition has not damaged the heart beyond repair, replacing selenium has REVERSED the congestive cardiac disease and lead to FULL recovery!(2) 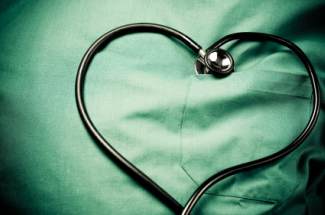 "[There is]...strong evidence for an adverse role of oxidative stress in CHF and suggest that antioxidant supplementation may improver myocyte function or survival, or both, and thus prove to be an important addition to our contemporary treatment of patients with CHF.”
'Increased Oxidative Stress in Patients With Congestive Heart Failure'

While Magnesium Deficiency is not one of the DIRECT causes of congestive heart failure, it is an indirect cause by contributing to the heart rhythm disturbances such as:

that can lead to Sudden Death from Congestive Heart Failure.

But I'm mentioning it here because it appears to play an incredibly vital role in maintaining heart rhythm once someone becomes diagnosed with CHF. Let me explain.

Sudden death is one of the MAJOR complications of congestive cardiac failure- occurring in up to 20% of people with CHF. And magnesium seems to be one of the few substances that can keep the heart rhythm in balance so that this does not happen.

The diuretics and heart rhythm drugs that are prescribed for this condition don't help to prevent sudden death and may actually make it WORSE! Yet they are still routinely given. People with congestive heart failure are NOT being given this information and would do well to get information about the research on heart failure and magnesium.

More About Heart Failure and Magnesium --->

Coenzyme Q10, also called CoQ10, Ubiquinol and Ubiquinone, is an antioxidant that is naturally occurring in every cell in the body. Antioxidants 'quench' a phenomenon called oxidative stress,  and higher levels of oxidative stress have been consistently measured in Congestive Cardiac Failure patients, and there is even an 'Oxidative Stress Hypothesis' of congestive cardiac failure. (3)

Coenzyme Q10 is more than 'just' an antioxidant, and plays a particularly important role in cardiac cells. In fact, there are researchers who believe that Congestive Heart Failure may be caused by an unrecognized disorder of cellular energy in the heart cells. And that is where CoQ10 comes in, it actually can solve this intracellular 'Mitochondrial' energy problem by supplying the cells with the raw materials that it needs to function.

WOW!! A Scientific Breakthrough... That's pretty strong. So, why haven't YOU been told about it by your doctor? That's a good question.

Yet in many, if not MOST cases, it is being shown that, nearly universally, ALMOST ALL patients with chronic illnesses- including congestive cardiac disease, are moderately to severely malnourished and benefit from intensive Congestive Heart Failure Nutrition. But the medical world simply chooses not to LOOK for these deficiencies, then conveniently labels these diseases as 'Idiopathic' heart failure in adults or Congenital Heart Failure in children.

Congestive heart failure patients also suffer from an excessively high rate of Sudden Death- which may ALSO be from nutritional deficiencies. Keep reading to find out which nutrient deficiencies lead to sudden death...

Next --->
Death From Congestive Heart Failure

coughing and CoQ10
last year, after a bout with asthma, my coughing kept getting worse. I read somewhere that uncontrollable coughing can be a sign of congestive heart failure. …

Any news on B6 and fatty acids?
My son suddenly got ill with cardiomyopathy and later passed away. hospital found no deficiencies but our daughter was also diagnosed. no genetic links …

Is There Natural Help for High Blood Pressure?
Is there a more natural way to lower blood pressure. I cant seem to find any blood pressure pill without Side Effects and I have Vitamin D Deficiency …

Back to Top of Causes of Congestive Heart Failure