Could You Have
Adrenal Gland Fatigue?

What Do the Adrenals Do Anyway?

The adrenal glands are two small bean shaped glands that each sit just above each kidney. They produce the Cortisol, DHEA and Adrenaline Hormones that are completely responsible for our response to stress. The adrenal glands are absolutely critical for our proper functioning and for good health. But few doctors realize this, and so you'll almost NEVER find out about the health of your adrenals from a traditionally-trained medical doctor.

Stress that contributes to adrenal gland fatigue comes in many forms and in our society, the 3 causes of stress being:

Over time, with all of these stresses, the adrenal glands go into a state where they are constantly overproducing stress hormones. Raised cortisol is a healthy response to stress, but NOT when it’s CONSTANTLY elevated.

Eventually, if the stress isn’t reduced, Adrenal Fatigue Syndrome or Adrenal Exhaustion will occur- and you'll have Low Cortisol Levels that make you tired, and get other destructive health issues. 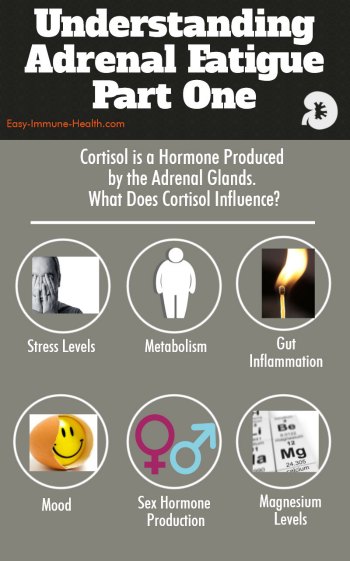 The least understood type of stress. Inflammation is the redness and swelling that is present when you twist your ankle- but some other causes of inflammatory stress that are harder to see are:

Yes, eating bad puts STRESS on your body, and if you have adrenal gland fatigue, you will NEVER get well if you continue eating sugar, processed foods, caffeine, artificial sweeteners and other foods that cause stress.

Gluten Sensitivity is a particularly damaging form of dietary stress that many people overlook.

What if I Have Adrenal Gland Fatigue?

Not only will you FEEL bad, but your Immune System becomes weakened. That’s because Cortisol, one of the adrenal gland hormones, is essential for its proper functioning. So a body that can’t produce cortisol can’t fight off infections anymore- and you’re more likely to get sick!

Let this situation continue and you can get any number of immune system problems:

You can also get symptoms of OTHER hormone problems that seem unrelated to Adrenal Fatigue. When your adrenal glands are working hard day and night, it ends up depleting your thyroid hormones and sex hormones because of a condition called Pregnenolone Steal.

You see, stress hormones are WAY more important on an evolutionary basis than any other hormones. So if you are producing cortisol all of the time, then your thyroid can't work and your libido will be low- simply because your pregnenolone has been 'stolen'.

Symptoms of Burned Out Adrenal Glands

Why Hasn't Your Doctor Tested You?

Unfortunately, just like the condition of Gluten Sensitivity, conventional medicine only recognizes the adrenal glands in one of two states: fully functioning or adrenal gland failure- a condition called Addison's Disease.

Unfortunately, this 'Either on or off' approach misses millions of people who are in the grey area of ‘poorly functioning’ adrenal gland hormones and fails to recognize that other glands- such as the thyroid gland and pancreas- have poor functioning states that medicine recognizes as hypothyroidism and Type 2 Diabetes respectively.

That conventional medicine doesn’t recognize Adrenal Fatique, discounts the fact that most people intuitively understand the relationship of adrenal gland symptoms to how they feel.

Many of my clients say to me, “I feel like I have adrenal burn out”. And this belief has persisted –with good reason- in our society, despite conventional medicine not 'believing' in this very real problem.

What if I Want to Be Tested?

Testing for Adrenal Gland Fatigue is a simple process that can be done using saliva test kits that are mailed right to your home. These tests were developed by the first researchers who studied adrenal gland hormones using cortisol levels. They found that blood testing gave a poor reading because the stress of sticking a needle into the arm, increased cortisol levels and made their results inaccurate.

Salivary cortisol testing works so well and is so easy that one study claims that Salivary cortisol is a BETTER measure of adrenal function than blood testing. A fact that must have escaped many doctors who continue to do blood testing IF they even choose to test for Adrenal Gland Fatigue at all.

“The measurement of steroid levels in
saliva provide a useful and practical
tool to evaluate adrenal functions,
which are essential for clinical diagnosis”
Salivary Cortisol and DHEA Levels

An Adrenal Function Test is very easy, painless and is done right in your own home. The ‘basic’ test takes a series of 4 samples at different times throughout the day and shows you the ups and downs of your ‘daily rhythm’. And at only $147 for this test, it’s inexpensive to find out if your adrenal gland hormones are too high or too low causing Adrenal Gland Fatigue or Adrenal Fatigue Syndrome.

While conventional medicine does not recognize Adrenal Gland Fatigue until the Adrenal Glands are COMPLETELY unable to respond, it affects TENS of THOUSANDS who are suffering from its effects. If you DO have adrenal gland fatigue, there is no reason to suffer when there are accurate laboratory tests, safe, powerful supplements and lifestyle changes that you can do to support your adrenal hormones.

Adrenal Supplements Making Me Feel Worse
Dr said low on all hormones and gave me DHEA(5mg) to try and just got hot and sweaty from trying it. Also prescribed capsules of progesterone and groggy …

Can Addison's Disease be Cured?
I have a Mennonite friend who was diagnosed with Addison's 2 years ago and is coming back with the Weston A. Price raw milk and high protein and enzymes …

Synthetic Thyroid Hormone and Adrenal Fatigue
Can adrenal fatigue interfere with the conversion of T4 into T3 in a post Graves Disease patient taking synthetic T4? My thyroid gland does not work so …

Addressing Adrenal Gland Fatigue Helped Me
I'm never sick I have not even had the flu in 20 plus years, however I became very ill a year ago, I went to 7 doctors and checked into the emergency room …

Adrenal Gland Fatigue vs PCOS...
Hi Kerri. I've been having a conversation with Joshua at www.TendonitisExpert.com Here is the page with the conversation so you can see details …

Back to the Top of Adrenal Gland Fatigue