Are Your Health Problems Actually Vitamin
B 12 Deficiency Symptoms?

Could YOU have Vitamin B 12 Deficiency Symptoms and not even be aware of it? While it sounds a little crazy,, there are many research studies estimating that up to 20% of the elderly in the US have undiagnosed vitamin B 12 deficiency! And that is just the elderly population, what about YOU! You don't need to be elderly to be deficient. Vitamin B12 deficiency symptoms are considered fairly rare- and it is this false belief that causes doctors to not even look for vitamin b12 deficiency symptoms- even when they are staring them practically right in the face.

Unfortunately, these signs of b12 deficiency are often mistaken for other problems- sometimes even devastating debilitating problems such as Alzheimer’s Disease, Multiple Sclerosis, and Symptoms of Fibromyalgia. Even worse, these problems can occur in the presence of normal or even increased Vitamin B12 Levels due to a genetic defect called the MTHFR Gene that can also lead to Vitamin B6 Toxicity, even when not taking B6 Supplements.

While the hallmark and “Classic” vitamin B 12 Deficiency Symptoms are:

problems that it seems half of the population has, most of the time doctors miss the diagnosis of vitamin B12 deficiency because the‘Standard of Care’ is to ONLY do Vitamin B12 Testing if a patient has a condition called Macrocytic Anemia- where red blood cells become large and shows up as a high number on the MCV Blood Test that is part of a Complete Blood Count.

But in the vast numbers of cases, Macrocytic Anemia is not present for several years after the onset of deficiency- and that leaves YOU suffering unnecessarily.

What makes this even MORE devastating is that these problems could be solved with some inexpensive over the counter Sublingual B12 Vitamins!

Mental Changes from B12 Deficiency

Some of the less classic, but still common, vitamin B 12 Deficiency Symptoms are Mental Changes from B12 Deficiency. These are particularly devastating because they cause so much disability, and yet are very responsive to therapy with Methylcobalamin B12 if they are caught early. Unfortunately, physicians rarely, if ever do the necessary Methylmalonic Acid Test that would allow the deficiency to be caught early and the sufferers usually go on to be diagnosed with an ‘incurable’ mental or neurologic ‘disease’. Some of these mental changes of B12 deficiency mimic problems such as:

In the elderly, many cases of simple vitamin B12 deficiency get diagnosed as Alzheimer’s disease and the elderly person is left with a lifetime of not even being able to remember their own name! In infants whose mothers have deficiency of Vitamin B12 in Pregnancy, they can have neural tube defects that are devastating. The symptoms of B12 deficiency are SO similar that One Research Study stated, “Alzheimer’s associated dementia and patients with cobalamin deficiency have identical neuropsychiatric symptoms”

What did they say?
Vitamin b 12 deficiency symptoms are
IDENTICAL to Alzheimer’s Disease! 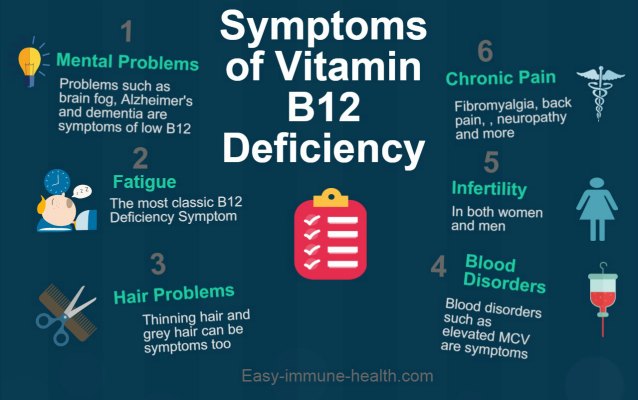 But they are also identical to Multiple Sclerosis- even to the point of the DEFINING feature of Multiple Sclerosis- spinal cord lesions. There have been multiple case studies of people with brain and spinal cord lesions REVERSING not only their SYMPTOMS, but actually improving or even completely getting rid of their lesions after Vitamin B12 Deficiency Treatment using high dose Sublingual B12 Vitamins.(1),(2)

Sadly, many of these symptoms are even CAUSED by the very doctors who then refuse to look for them. Some mental changes occur due to the use of Dental Nitrous Oxide, a diabetes drug called Metformin, or another drug called Nipride which deplete Vitamin B12 levels and can often cause neurologic deterioration that goes unrecognized by the doctors that CAUSED them!

The Facts about Vitamin B12 show that chronic pain conditions can also be vitamin B 12 deficiency symptoms. Particularly back pain, Peripheral Neuropathy and Symptoms of Fibromyalgia.

That Vitamin B12 Deficiency is one of the Reasons for Back Pain one of the most exciting, yet entirely overlooked problems associated with vitamin B12 deficiency. Back pain affects almost 1/3 of the entire population. Yet, in some cases it is simply another one of the vitamin B 12 deficiency symptoms.

Pain Related to Vitamin D Deficiency can ALSO have these same symptoms and are often related due to the inability to absorb nutrients. So, if you have Chronic Pain, then get both your Vitamin D Level AND your Vitamin B12 Levels checked!

Vitamin B 12 Deficiency Symptoms can also be the Causes of Infertility in Men and women. Just like Gluten Sensitivity and Infertility, doctors rarely look for these easy to remedy nutritional problems that, when remedied, can and do Increase Male Fertility and allow women to get pregnant without having to resort painful and expensive medical procedures such as In Vitro Fertilization.

While it seems completely logical and intuitive that malnutrition could be an obvious cause of infertility, in our culture we don't believe that people who look healthy and go on about their day to day lives could possibly be malnourished or have nutritional deficiencies.

But even young and seemingly 'healthy' people can have nutritional deficiencies- not only vitamin B12, but other B vitamins and also Vitamin D are MUCH more common than is generally believed, especially when one factors in the high rate of the MTHFR Gene Mutation, which leads to Vitamin B12 deficiency.

And deficiency of Vitamin B12 can cause changes in ovulation(6), recurrent fetal losses(7)(8), and even in male infertility as well(9)(10)! While infertility doesn't seem like it would be a 'Symptom' of a vitamin deficiency- it is one seriously underestimated and easy to remedy problem that can help desperate families finally become parents.

Unfortunately, when you begin Understanding Blood Test Results, you see that a related vitamin- folic acid- often effectively PREVENTSthese blood cells from becoming deformed. The so-called important step of governments mandating the fortification of bread and cereal products has effectively masked the presence of vitamin B12 deficiency in much of the population!!

Skin and hair problems and not often thought of to be vitamin problems either, but the often embarrassing skin problem ofhyperpigmentation- when the skin becomes very dark in patches, could very well be one of the Symptoms of Vitamin B 12 deficiency(11)(12).

Beyond that, one study even considered that vitamin B12 was vital in so many functions that they called it the 'Master Key' nutrient,

"We suggest that this "Master Key" concept can be tested
by treating diseases, such as recurrent stomatitis,
various forms of hyperpigmentation, trophic ulcers,
and burns, with vitamin B12, even if the
B12 serum level is normal."(14)

But if you DO have Vitamin B12 Deficiency, don’t just get ANY Vitamin B12 Supplements. You should ALWAYS get a form of Vitamin B12 called Methylcobalamin B12 which is NOT in Vitamin B 12 Shots! And keep reading to see WHY you don't need vitamin b12 shots anyway- even if your doctor says that you do...

Next--->
Vitamin B12 Shot Problems

Resources for Vitamin B 12 Deficiency Symptoms

Already Answered Questions about Vitamin B12

Click below to see already answered questions about Vitamin B12?

Paraesthesia in hands. Is it from Vitamin B12 Deficiency?
I have been having tingling in both hands for a week that is constant. I have no other neurologic symptoms (strength &sensory are intact). I am fatigued …

Elevating Creatinine lvls from B6 toxicity and B12 deficiency or magnesium supplements?
Hi, First off I just found this website yesterday and am finding it to be a marvelous resource! You are doing a great service to large and probably …

Vegan B-12?
I am trying to find a vegan B-12. Most contain dairy. are there any that you know of that are vegan and the type of b-12 you recommend?

Vitamin B12 and Hairloss
I am suffering from Hairloss - my b12 results are 411. Please help me on whether you think this would be contributing to hairloss?

PERNICIOUS ANEMIA
2009 - diagnosed with Hereditary Pernicious Anemia. Advised of need for monthly B12 shot & did so religiously. Severe & hospitalized, nerve damage, but …

Can Vitamin B12 Deficiency Cause Bad Breath
I have a bad breath from my stomach and I read on some paper and can you believe if I have vitamin B problem can it cause bad breath?

Vitamin B12 for Disc Problems
I have leg and arm pain that can be debilitating on the right side of my body. I was intrigued by the article and if b12 can really help. I am sure I …

Still Having B12 Deficiency Symptoms Despite Treatment
Hello I am writing with regards my wife Jo she is 46 years old, as a vegetarian of 30+ years she was diagnosed with a vitamin B12 deficiency in Feb 2012 …

Vitamin B12 in treatment of neuropathy?
Can you please tell me if there is a relationship between vit B 12 deficiency & neuropathy? I have foot drop in my right foot due to spinal stenosis. …

Is Memory Loss from Vitamin B12 Deficiency Reversible?
My husband was just in the hospital and they told him that he has a vitamin B12 deficiency that is why he is having problems with his memory, being weak …

Vitamin B12 Deficiency, MS and Parkinson's
I was diagnosed at the first of May with severe B12 deficiency, Level 43. I had parkinsons,ms,neurophy in hands and feet etc. I read the information on …

Research on Vitamin B 12 Deficiency Symptoms

(1)Dementia associated with vitamin B(12) deficiency: presentation of two cases and review of the literatureMRI Appearances in Subacute Combined Degeneration of the Spinal Cord

(3)Treatment of depression: time to consider folic acid and vitamin B12

(4)Folate, Vitamin B12, and Neuropsychiatric Disorders

(11)Generalized hyperpigmentation of the skin due to vitamin B12 deficiency

(13)THE VITAMIN B12 LEVEL IN PSORIATIC SKIN AND SERUM

Back to Top of Vitamin B 12 Deficiency Symptoms