Fibromyalgia in Children is Not a
Disease, It's a Failure of the
Medical System

The current trend of diagnosing Fibromyalgia in Children does NOT mean that a new disease is on the rise. This is simply a tragedy of an entirely failed medical system that only works with drugs and symptoms and has no idea about finding the underlying cause of medical problems and has no understanding of looking for solutions beyond drugs and surgery.

Certainly these Early Symptoms of Fibromyalgia are real. But calling symptoms a 'disease'- let alone an incurable disease- is wrong and unethical, especially in children. It is bad enough to not delve into finding the Fibromyalgia Cause in adults when there are MASSIVE amounts of Fibromyalgia Studies that give answers and help for these symptoms.

But refusing to look to this body of research for answers in children shows the absolute dire state of our medical system that refuses to even attempt EXTREMELY SAFE therapies, such as the ones on the Fibromyalgia Supplements  and the Melatonin for Children pages- and would rather call Fibromyalgia Genetic and give these children a lifelong diagnosis of an incurable disease than look to natural means to solving their problems.

The Diagnosis of
Fibromyalgia in Children

While this sounds good in theory that doctors must have done laboratory testing and made sure that there is no other reason for their pain and fatigue. In reality, they do as many tests as they do for adults to 'Rule Out' any underlying causes.

But what does this really mean? Who decides WHICH laboratory tests have to be normal? How in depth are they required to look? The answer is that it is up to the judgment of a doctor who isn't likely looking for any NUTRITIONAL causes of this pain and fatigue. But they should be. The correlation of the Early Symptoms of Fibromyalgia, such as the notorious Fibromyalgia Trigger Points, are sometimes EXACTLY the same as those experienced in specific nutritional deficiencies or other common problems that doctors just don't recognize such as the ones that I'll be discussing below.

The similarity between Symptoms of Vitamin D Deficiency and Fibromyalgia symptoms is remarkable- to the point that it should be a LAW that no-one can be diagnosed with Fibromyalgia without having their Vitamin D Levels checked and optimized. These identical symptoms of:

are outlined on the Fibromyalgia and Vitamin D page. Please read this page so that you can see these shocking similarities between these two problems. The fact that studies show that Vitamin D Deficiency is WIDESPREAD among children should make doctors check vitamin d levels- but unfortunately, it doesn't. 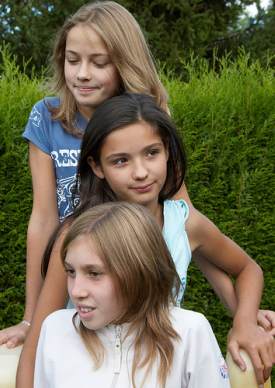 Celiac disease and even Non Celiac Gluten Intolerance can cause identical symptoms to fibromyalgia including:

And indeed, there HAVE been studies, Studies Like This show Fibromyalgia patients have Increased Intestinal Permeability - which is one of the hallmarks of Celiac Disease and Gluten Sensitivity.

Unfortunately, the symptoms of Celiac Disease and gluten intolerance are NOT straightforward and the Diagnosing Gluten Allergy is SO difficult that studies show that it takes an AVERAGE of 10 years after the beginning of symptoms to get a diagnosis of Celiac Disease. ANY chronic illness in a child should make doctors suspect celiac disease- but unfortunately it does not.

The numbers of children (and adults) that may be misdiagnosed with Fibromyalgia who actually have Celiac Disease will likely never be known with our medical culture going more and more into Diagnosing Fibromyalgia simply based on the presence of specific pain and tender points rather than attempting to find an underlying cause of this pain.

Since I have outlined the other similarities between the Early Symptoms of Fibromyalgia and conditions such as:

Continue reading to see what Fibromyalgia Supplements have been shown to be beneficial as well...

Back to Top of Fibromyalgia in Children