Melatonin for Children
Is That Such a Good Idea?

Is giving Melatonin for Children safe, or could you be harming your child by giving them melatonin? Melatonin is a hormone that is produced in the pineal gland between your eyes and in the digestive tract when you are exposed to darkness to allow you to sleep. While naturally produced melatonin is absolutely safe, is supplemental melatonin for children a good idea? 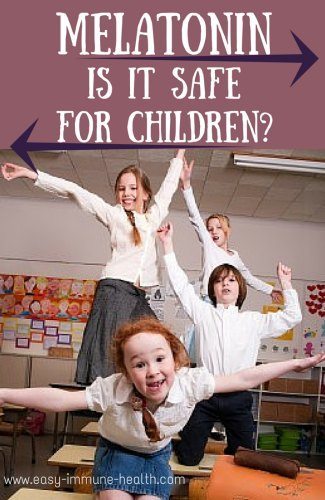 While there are very few of the high quality 'double blind placebo controlled' studies that doctors and researchers insist are the only 'good quality' types of studies, there have been many many 'open' and 'crossover' studies in children with:

While it hasn't been studied for the use of Fibromyalgia in Children, since one of the defining characteristics of fibromyalgia is an altered sleep/wake disorder, it may also be effective in these children.

There HAVE been a significant number of studies using Melatonin in children and the conclusion of nearly every single one was that melatonin was effective in helping sleeping disorders in the vast majority of these children, while having few to no Side Effects of Melatonin. It's so safe that quite high dosages have even been given to, and shown improvements for, critically ill newborn babies on life support! That's how safe melatonin for kids is.

Side Effects of Melatonin for Children

Among the few side effects that DID occur, most were related to sleepiness in the morning while A Very Small Number had temporary headaches, nightmares or wet the bed somewhat more frequently.

Otherwise, over the decade of melatonin supplementation has caused VERY few reports of problems to the FDA.

Because the Defeat Autism Now protocol also recommends melatonin in children with sleeping problems, thousands of autistic children have been taking melatonin safely for long periods of time with few reported problems.

Is melatonin in children safe for kids with seizure disorders? In at least one study, there was a report of a developmentally disabled child having a first ever seizure after beginning the melatonin study, so therefore some doctors will say that it is not safe to give to these children.

So, despite one report of a child having a seizure after beginning treatment, the literature and reports seem to suggest that melatonin can actually be beneficial for kids with seizures.

In any case, there seems to be no reason to not give your child melatonin for sleep disturbances simply because they have a seizure disorder or worry that the melatonin might cause a seizure. There just seems to be little to no justification for this warning when it's used safely in thousands of children with autism and developmental disorders every year.

Dosage of Melatonin for Children

Most studies of melatonin and children have given a Melatonin Dosageof between 1 to 6 mg in the evenings. But several adult studies and some reports in melatonin for kids show that even as little as 0.1 mg (1/10 of one milligram) can be just as effective and potentially cause fewer problems with sleepiness in the morning or nightmares.

While that doesn't sound like very much, there have been case studies of adults showing that higher doses were INEFFECTIVE, while lower doses were MORE effective. While it's nearly impossible to Overdose on Melatonin, it's still prudent to give melatonin for children at the lowest dose that is effective late in the evening or just before bedtime.

Overall, Melatonin for Children seems to be an effective and amazingly safe therapy for children with sleep disorders from almost any cause. In addition, children with digestive problems have shown improvements due to Melatonin Benefits as a smooth muscle relaxant. Keep reading to find out more about the Melatonin Long Term Effects..

Back to Top of Melatonin for Children