Non Celiac Gluten Intolerance
It's Real and You Might Have it

Is there such a thing as Non Celiac Gluten Intolerance? While many claim that they become sick when eating gluten, a component of many common grains, most doctors say that you can ONLY be intolerant to gluten if you have a genetic condition called Celiac Disease. But many of these people making the claim that they feel better when they eliminate gluten, have been tested for the disease and the results have been negative. Their doctors claim that they should be able to eat gluten without any problems, while they insist that they can’t and want their doctor to validate their claim of non-celiac gluten intolerance.

The debate centers on this condition that we will call ‘Non Celiac Gluten Intolerance’ or Gluten Sensitivity for lack of a clinical name. But is this condition real? Can avoiding the minute amount of protein in wheat, a substance known as gluten or gliadin, REALLY help people feel better and even recover from illnesses as they claim it can.

What is the Evidence of
Non Celiac Gluten Intolerance

There are many kinds of food sensitivities, one of which is Gluten ALLERGY , but that is not what we are talking about. Gluten Sensitivity is the inability to digest gluten because of a lack of a specific enzyme. The undigested gluten then sits in your digestive tract and gets attacked by your Immune System! you begin to produce antibodies to gluten, the gluten continues to be attacked, and damage to the intestinal tract is the result. So the HALLMARK of Celiac Disease is that you MUST either have:

If these are not present, then you will not be diagnosed with Celiac Disease. You MAY only have one or the other, but you can’t have neither and get a diagnosis.

But this is where the problem comes in. Many people who have no damage to the intestinal tract AND no antibodies to gluten (or a minimal amount of antibodies that doctors say 'don't count') claim to feel better when they don't eat gluten. But without laboratory validation, doctors CANNOT Diagnose Gluten Sensitivity.

But because doctors cannot do a test for gluten sensitivity, they simply cannot give you a diagnosis. And many people with this problem often feel rejected and abandoned by the medical profession; sometimes even by their friends and family who won’t believe that they have a problem when they eat gluten.

Interestingly, no one cares whether a doctor has diagnosed you with LACTOSE intolerance, yet a doctor will be happy to take your word for it– no diagnostic tests necessary. So why the discrepancy between non-celiac gluten sensitivity being real when they fully recognize lactose intolerance as real? It's a good question to ask your doctor. 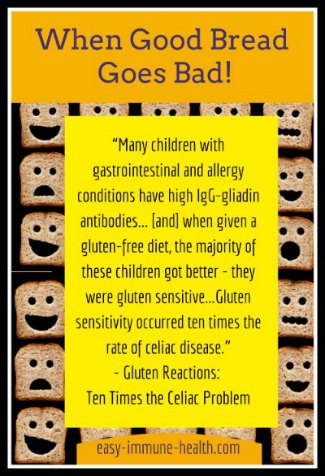 So, we know how Celiac Disease is diagnosed, what is the evidence of Non Celiac Gluten Sensitivity in the literature? What do scientists have to say about the subject?

Surprisingly there is a lot of evidence of Non Celiac Gluten Sensitivity.

“Many children with gastrointestinal and allergy
conditions have high IgG-gliadin antibodies.
Results of this test have usually been disregarded.
But when given a gluten-free diet, the majority
of these children got better - they were gluten-sensitive.
..Gluten-sensitivity occurred ten times the rate of Celiac Disease.”
Gluten Reactions: Ten Times the Celiac Problem

So, in the above study, when scientists used improvement in health conditions as the endpoint of the research- instead of DIAGNOSTIC MARKERS- they came to the conclusion that Non Celiac Gluten Sensitivity occurs TEN TIMES more frequently than Celiac Disease!

And since the approximate number of people with Celiac Disease in the population is between 1 in 100 or 1 in 200- depending upon the research and the genetic background of the area, that implies that people have Non Celiac Gluten Sensitivity at a rate of about 1 in 10 or 1 in every 20 people! That is a HUGE number of people. That is about one person who is shopping in the grocery store at the same time as you, one to two children in a typical elementary school class or one person on every baseball team!

So, if Non Celiac Gluten Intolerance is real, this could be an ENORMOUS number of people whose health conditions could be due to gluten sensitivity yet no one in the medical community will validate this- leaving people like YOU who could massively improve their health by simply avoiding ONE substance!

Actually, there is a lot more...

This Study confirms the 1 in 10 theory of Non Celiac Gluten Sensitivity by finding that approximately 1 in 10 people have the GENES for Celiac Disease. While most people believe that having the GENES for a disease gives you a disease, it only gives you the PREDISPOSITIONfor the disease- not the disease.

You need the right (or wrong) lifestyle conditions in order to EXPRESS those genes. That's why runners don't often get heart disease, even when it's in their family. And that's why if you have the GENES for Celiac disease, you would never even know it if you, for instance, grew up on a remote Pacific Island that had no trade with the outside world and you never ate wheat grains.

This Study found that many people who were diagnosed with Lupus were actually misdiagnosed- and SHOULD have been diagnosed with non celiac gluten intolerance instead!

And there is SO MUCH more Research on Non Celiac Gluten Intolerance and so many other aspects of Gluten Sensitivity that you will be AMAZED!!!

Why Would Gluten Cause
Health Problems?

In one sentence, gluten is an inflammatory food. There are foods that cause inflammation in the body and there are foods that can reduce inflammation. Omega 3 Fatty Acid Supplements and Leaky Gut Supplements such as Support Mucosa, for example, are highly ANTI-INFLAMMATORY simply by their nature. But foods such as Polyunsaturated Oils and gluten, in all cases and in all people- are INFLAMMATORY. And inflammation is at the heart of the VAST majority of diseases. As we discussed earlier, gluten activates the immune system, and anytime the immune system is activated there is ALWAYS inflammation produced.

In those people that are not sensitive to gluten, they are simply able to tolerate it much better OR they simply eat it less often, which overall causes less of a problem. But it always and in everyone causes some degree of immune system activation – and resulting inflammation. And that's why so many people feel better when they completely stop eating gluten.

Additionally, newer research, as summarized in this article entitled Expanding the Spectrum of Gluten-Related Disorders is showing that having particular genes, usually those associated with autoimmune disease, activates a specific protein called zonulin that leads to leaky gut syndrome. About 7 to 9% of the population have genes that lead to zonulin creation, further validating that gluten sensitivity is about 10 times more prevalent than Celiac Disease- and that it's truly a real phenomenon.

How do You Find Out If You Have it?

The only way to know for sure, is to try out a gluten free diet for about 60 to 90 days and see how it makes you feel. If you feel better, then you are gluten sensitive- if not, then you either:

It's pretty simple. And people who are lactose intolerant simply live their lives without any validation from the medical world that they can't eat dairy products. So, if you find that you have Non Celiac Gluten Intolerance, you can go the frustrating route of attempting to Getting Diagnosed with Gluten Sensitivity- or you can simply KNOW and choose to eat in a way that makes you feel better- regardless of who 'believes' you or not. You can get the Healthy Urban Kitchen for help.

It's Real and Here's Proof! This is the Research

See Other Questions about Gluten Sensitivity

Click below to see already answered questions about Gluten Sensitivity

Could I Still Have Gluten Sensitivity Without Intestinal Problems?
About six months ago, I started having problems with my muscles--weakness, burning, aching, etc. It got so bad that all I could do is lie on my sofa all …

Gluten Intolerance, Low Vitamin D and Adrenal Fatigue
About 15 years ago, I became increasingly ill. Regular MD docs gave no help (surprising, I know!) and only offered to put me on anti-depressants. An …

Can gluten intolerance come and go?
My 25-yr. old son was exhibiting many of the classic symptoms of gluten-intolerance at 21 years of age, went on a gluten-free diet, and except for the …

Multiple Deficiencies, Chronic GI Problems, and Thalassemia Minor
I am only 22 yrs. old. The entire time I was in college and still today suffer greatly from constipation, severe stomach problems and chronic fatigue. …

Upper respiratory symptoms from gluten?
My son has been gluten free for almost three years and has never been healthier. He is 13 and also has autism. I have had IBS for years, and was diagnosed …

Years of unexplained digestive and sinus problems
Are tests for gluten problems always accurate? I have had years of what feels like everything is moving through my body at a slow rate. It feels toxic. …

Strange Symptoms- Could it Be Gluten Sensitivity?
For almost 5 years, I have experienced alternating diarrhea (with whole pieces of undigested food in the toilet, as if I just took it out of the kitchen …

Could Multiple Vitamin Deficiencies be a Sign of Non Celiac Gluten Intolerance?
I was recently told by my doctor that not only do I have low vitamin D but vitamins B6 and B12, as well as a high Methylmalonic acid serum level. I …

Low D levels combined with anemia
My Vitamin D level came back yesterday as 15 ng/ml. I am also anemic. I have never heard of Vit D deficiency and I am a 42 yr old nurse who works in …

Back to Top of Non Celiac Gluten Sensitivity