If you have Fibromyalgia, chronic fatigue or any type of pain- no matter what the cause- you might ACTUALLY be suffering simply from Vitamin D Deficiency or a combination of any one of many REAL fixable problems that may be a Fibromyalgia Cause that your doctor is simply missing.

"There may be a pain syndrome associated with
vitamin D depletion that appears as hyperesthesia
worsened by light, superficial pressure or
even small increments of movement."
Can Vitamin D Deficiency Produce an Unusual Pain Syndrome?

Because the symptoms experienced are so similar, it is absolutely CRITICAL that you get your vitamin d level checked and corrected so that you are in the 'Optimal Range' as outlined on the Vitamin D Levelspage.

Enough people experience significant and even complete resolution of their Symptoms of Fibromyalgia that you just simply can't skip this step. Do not make the mistake of thinking that you get enough vitamin d already that you can't possibly be deficient- you might be SHOCKED to find out how low your vitamin d level is. 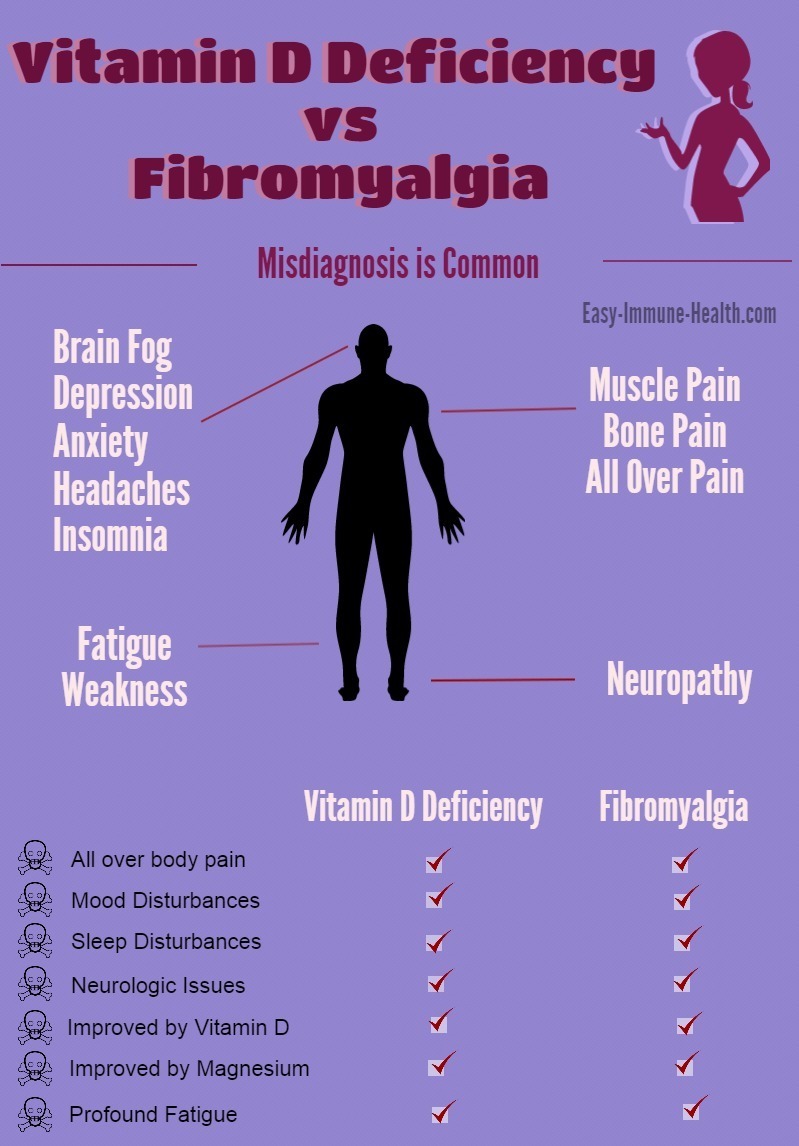 In fact, one study that tested the Vitamin D Levels of Fibromyalgia patients found the average level was a SEVERE DEFICIENCY of 15 ng/ml (51 nm/L). Unfortunately, they came to the conclusion that Fibromyalgia CAUSES vitamin d deficiency instead of thinking that Vitamin D deficiency causes symptoms of fibromyalgia!!

The pain that is experienced from Vitamin D Deficiency is due to a condition called Osteomalacia. Osteomalacia is nearly identical to osteoporosis, except that it is painful. It is the main reason that Vitamin D and Pain are so related.

The pain that occurs in osteomalacia is significant because, like fibromyalgia, it occurs when pressure is applied to the skin. In fact one of the 'general' ways that you can determine if you have osteomalacia is to press your thumb down hard on the sternum (the bone in the center of your chest) and if this causes pain, then it is likely due to osteomalacia.

In osteomalacia, the pain is often described as 'bone pain' and can be felt all over the whole body- but all over muscle pain (myalgia) and 'connective tissue'(fibralgia) pain that can be experienced as Fibromyalgia Trigger Points, is also experienced by both those with osteomalacia and those with fibromyalgia. Other similarities are that both are:

Some 'experts' may cite very minor but specific differences in the types of pain experienced by those with osteomalacia and those with fibromyalgia. But And Fibromyalgia Studies show that experts and clinicians who are actually using vitamin d for people in pain know that these differences are of absolutely no consequence. When vitamin d reduces or eliminates pain in such a high number of people with 'Fibromyalgia', do you really CARE about the subtle differences in the pain that is being experienced?

The Fatigue Connection Between
Fibromyalgia and Vitamin D

The profound fatigue experienced by those with Fibromyalgia is identical to the fatigue reported by people in studies of Vitamin D Deficiency. It's just another strong connection between fibromyalgia and Vitamin D.

"A strong correlation between low 25(OH)D levels
and higher rates and longer duration of
generalized bone and/or muscle aches and pains
(often diagnosed as fibromyalgia) was observed."
High prevalence of vitamin D deficiency and
generalized bone pain in Turkish immigrants in Germany

Myopathy is the experience of weakness in the muscles and is almost a universal finding when Diagnosing Fibromyalgia. It does not always indicate that something is wrong- most of us have experienced myopathy at one time or another from vigorous exercise that left us feeling sore and weak the next day.

"Myopathy, due to chronic vitamin D deficiency,
probably contributes to immobility and ill health
in a significant number of patients in the
northern United States. An awareness of this condition
may significantly improve mobility and quality of life."
Severe Myopathy Associated With
Vitamin D Deficiency in Western New York

Some studies of people with Fibromyalgia and Vitamin D Myopathy so severe that they were disabled and in wheelchairs, like the study from the quote above, show that PROPER Vitamin D Deficiency Treatment completely resolved this disability and actually allowed severely disabled people to get out of their wheelchairs and walk again!! That is how important it is for anyone with generalized muscle weakness to have it distinguished between Fibromyalgia and Vitamin D Deficiency.

Depression is another one of the most common complaints of those with Symptoms of Fibromyalgia and is often severe and disabling. While pain, fatigue and disability contribute to the experience of depression, vitamin d deficiency is likely one of the other causes of depression and mood problems.

If you know ANYTHING at all about vitamin d, it's that it can help relieve mood problems- including depression. The experience of Seasonal Affective Disorder during winter months in northern climates almost certainly has a large element of vitamin d deficiency. And study after study using large doses of vitamin d in those with severe illnesses discovered that one of the most common Side Effects of Vitamin D was an improved mood!

So, if you have symptoms of fibromyalgia, pain, fatigue, depression or really ANY chronic illness, you absolutely just must get your vitamin d level checked and increased to the research recommended 'Optimal' Vitamin D Levels. If your symptoms are, even in part, due to a vitamin deficiency- wouldn't you want to DO something about it...

Click below to see already answered questions about Fibromyalgia.

Fibromyalgia and Chronic Low Back Pain
i have been diagnosed with fibromyalgia.Im 40 yrs old female.But im not sure of the diagnosis.I have severe and constant pain in lumabr spine and left …

Fibromyalgia or D3 not sure here are symptoms
I was born premature and history of asthma and didn't get growth spurt yet I'm almost 17 these past few years I've been complaining about bone pain, I …

Fibromyalgia and Vitamin D Deficiency
I have been diagnosed with Fibromyalgia for several years now. I have been on so many meds it is unreal and none seem to work very well or for very long. …

Low Vitamin D Levels and Fibromyalgia Pain
I have been experiencing most of the fibromyalgia like pains you have described on this page. My vitamin D level was tested as being 28.3. Would that cause …

Muscle Cramps & Spasms
I have been having massive problems, particularly in the middle of the night while sleeping, with debilitating cramps in both of my calves about 4" below …

Fibromyalgia, Irritable bowel syndrome, vit D, Calcium, Magnesium complications to digestion.
I suffer from fibromyalgia, IBS and have a vitimin D deficiency. Also had complete hystorectomy at age 34 (now 59)at which time I started on 1000mg of …

Vitamin d allergy
I have had fibro for many years. I am having problems with vitamin d. I cannot tolerate oral supplements, they give me gerd and make my IBS flare. I cannot …

Dx of Vit D Deficiency & Fibromyalgia w/possible menisca tear.
Hi, I have seen a Spine & rehab physician for nearly 1 1/2 yrs. I was sent to him due to numbness, tingling, headache, warm/heat in all extremities, along …

Back to Top of Fibromyalgia and Vitamin D