Is Fibromyalgia Genetic?
It Is... and it Isn't

Is Fibromyalgia Genetic is a question that gets asked by those suffering from this illness and hoping for a way to explain their problems. While Fibromyalgia Has been shown to run in families- particularly in mothers and daughters- it could be genetically related in ways that we'll talk more about below, however, fibromyalgia is a SYMPTOM and not a 'disease', so the real question to ask is not "is fibromyalgia genetic", but "what solutions are there so that I can overcome my symptoms?"

"The exposure of a genetically predisposed individual
to a host of environmental stressors is presumed
to lead to the development of FMS."
The genetics of fibromyalgia syndrome

If you read the above quote again, you'll see that it's really just nonsense. You could use the exact same statement for any and every disease or condition that there is. The author is making a true statement of every disease that ever was and ever will be- that disease arises through the interaction of genes and the environment.

One gene that has been identified in a higher number of people with Fibromyalgia than in the rest of the population is the MTHFR Gene (1)(2). MTHFR is short for the Methylenetetrahydrofolate Reductase Gene, and is quickly becoming identified in a vast array of health issues. It is NOT, in any way 'specific' to fibromyalgia and so is not a 'fibromyalgia genetic' connection, so to speak; it's much more complicated than that. 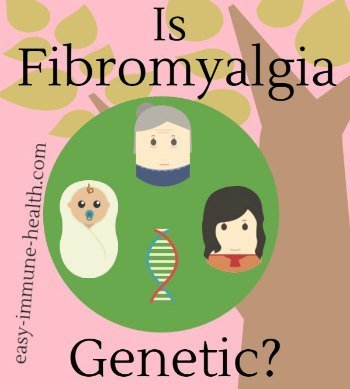 The MTHFR Gene is responsible for a vast array of processes in the body, including detoxification, the creation of specific enzymes and so much more. Because it's involved in such a wide array of processes, it's presence has been related to just about every chronic health condition you can think of, not just fibromyalgia.

And considering this gene is present in up to 33% of the entire population, it's worthwhile for almost everyone with any chronic health condition to go the VERY affordable route of getting a genetic test through 23andMe to see if they have the MTHFR Gene, or some of the other genes that are being identified as important contibutors to chronic illness. While finding genes for illnesses is usually pronounces one unable to change their situation, the MTHFR has some real solutions in lifestyle that can dramatically improve your health.

While Gluten Sensitivity is a controversial topic these days, with many calling the recent rise of gluten-free diets a 'fad', it's only people who do not look at the research that can't see this diet as a potentially powerful tool for the improvement in chronic illnesses.

Fibromyalgia is no exception, and there have been studies showing that Celiac Disease, the 'full-blown', medically-recognized form of gluten sensitivity is present in Fibromyalgia patients at rates almost SEVEN TIMES higher than the rest of the population! (3) Additionally, Non-Celiac Gluten Sensitivity could be a big problem as well, even though it's less-recognized as a true medical issue.

However, this exclusion of non-traditional gluten issues from the diagnosis of fibromyalgia is a big mistake, and recent studies are coming to light that genes known as Haptoglobin (phenotypes HP 1- and 2) could very well be responsible for an incidence of gluten sensitivity of up to 15% of the population! The genetic mutation codes for a protein that produces a substance called Zonulin in the presence of gluten, creating Leaky Gut Syndrome.  (4). We already know that this gene is correlated in those with some of the many autoimmune diseases. Will studies show a Fibromyalgia Genetic correlation in the future? I suspect they will.

More and more research is being done into the science of 'epigenetics'. Epigenetics is the science of HOW the environment - including specific nutrients- acts upon the genes in order to CONTRIBUTE to disease. The answer to, "Is Fibromyalgia Genetic ?" is YES- it is the sum total of how YOUR genes interact with your environment. And the way that fibromyalgia patients interact with their environment is often interesting and leads to more solutions than could ever be found in any study of a fibromyalgia genetic connection!

"…those who think, correctly, that autism
[or Fibromyalgia, or diabetes, etc.] is a
genetic disease, stop thinking after that,
reasoning that genetic diseases are untreatable.
Such thinkers do not understand epigenetics (upon the genome).
Vitamin D is probably the heart of epigenetics,
as nothing works upon the genome like vitamin D.
Dr. John Cannell of the Vitamin D Council

An acute experience of stress is the one Fibromyalgia Cause that most people will agree upon. But where opinion diverges is that Stress and Fibromyalgia contributes to many of the Symptoms of Fibromyalgia and that it causes the problems that include:

which then leads to a CASCADE of problems that causes stress hormone production, nutrient depletion and inflammation. These processes then act on genes in particular ways turning them on or off. An excess of stress hormones on a particular gene will give particular results. In one person, it might contribute to heart disease, in another person diabetes, and another Fibromyalgia.

Interestingly, as the above quote by Dr. Cannell alludes to, specific substances on genes, called 'Vitamin D Receptors' or VDR's- which are explained in greater detail on the Vitamin D Facts page- are present in the genes of nearly every organ and part in the human body. This is why the Symptoms of Vitamin D Deficiency can involve nearly every organ system and disease imaginable.

In fact, you have ALREADY BEEN doing that- you just need to learn to turn it around so that you are using this to your ADVANTAGE, instead of your DISADVANTAGE. You can use it to create HEALTH instead of ILLNESS. You DO have control of your genes- whether you like it or not or whether you believe this or not- and you CAN use them to improve your Fibromyalgia.

Learning more about the connections between:

to see how these all have interacted with your genes in order to make you sick- and then you will be able to have better control over how these environmental issues have contributed to your Symptoms of Fibromyalgia and use these 'Epigenetic Manipulators' to turn things around.

So, while researchers will officially say that Fibromyalgia occurs in a 'Familial Aggregate', this is really meaningless if you are actually trying to find a SOLUTION to your fibromyalgia. And if you weren't born with fibromyalgia, then you CAN affect your genes to improve your condition. Even when Fibromyalgia in Children is diagnosed, this does NOT mean that is is 'Genetic', only that it's 'Epigenetic'. Keep reading to find out more about effective Fibromyalgia Supplementsthat can help to push the Fibromyagia genetic issue into your FAVOR…

Take a look at the Fibromyalgia Genetic page to see why even if Fibromyalgia is genetic, it means little to you!

Back to Top of Fibromyalgia Genetic Page