Diagnosing gluten allergy is tricky business; business that your doctor is unlikely to be able to help you with. In fact, your doctor will probably just make things more confusing for you instead of helping you.

All too frequently, those with mild and moderately severe gluten intolerance are told that they don’t have it, or even that there is no such thing! Studies have shown that even people who have Full-Blown Celiac Disease, the most severe form of Gluten Allergy, have "Symptoms present on average 11 yr before diagnosis"!

Read that again. For those with a disease that can be diagnosed by doctors, it takes, on average, more than an ENTIRE DECADE from the beginning
of the Symptoms of Gluten Intolerance before getting diagnosing gluten allergy! TEN YEARS! That is seriously negligent on the part of doctors.

Even more shocking is that Celiac Disease occurs about 1 in every 100 people - yet a survey of doctors revealed that 65% of doctors had NEVER diagnosed even one person with Celiac Disease! And the average doctor who responded to this survey had been in practice an average of 20 years!!

Doing some 'back of the napkin math' each doctor had to have seen AT LEAST a thousand patients per year. So, these doctors had not diagnosed even ONE patient in 20,000 with a disease incidence of 1 in 100 people. So, what do you think are YOUR odds are of YOUR doctor diagnosing gluten allergy?!

So with this math, EACH doctor that responded left at least 200 people to suffer with health problems for years. This adds up to HUGE NUMBERS of people suffering needlessly from symptoms that could be easily remedied with diet if only their doctors knew what you will soon know.

And that is only the numbers for Celiac Disease. This doesn't include those with Gluten Sensitivity, which by some accounts, occurs at ten times higher rates than Celiac Disease, and even up to 15 times. That would mean that each doctor left over TWO THOUSAND people to suffer for years without help! Are you one of your doctor's two thousand neglected patients?

Why is diagnosing gluten allergy so difficult?

The “gold standard” to test for celiac disease is an intestinal biopsy. This is a procedure where you are sedated and a camera attached to a long flexible tube is placed into your digestive tract. A small sample of the intestine is removed, also called a biopsy, and sent for testing where a pathologist will check for a condition called Villous Atrophy. Intestinal Villi are small projections that stick out from the intestinal wall. They increase the surface area of the intestine many times over in order to absorb the maximum number of nutrients possible. 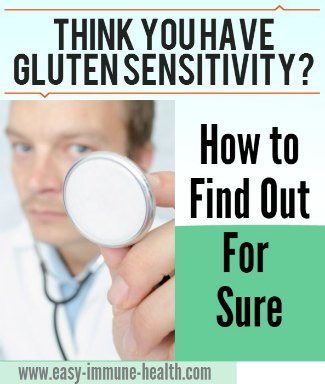 NOT good for nutrient absorption.

However, the problem with using this method as the “Gold Standard” for diagnosing celiac disease is that you must have rather severe gastrointestinal symptoms to even HAVE the test done in the first place.

Furthermore, if you DO have symptoms that would justify having such an invasive procedure to be done, you have to have a lot of damage in order to get a diagnosis. Having a small to moderate amount of Villous Atrophy will not get you a diagnosis of celiac disease or gluten sensitivity.

Think about it, even if you have a small amount of villous damage, it makes sense that you have gluten sensitivity to one degree or another, right? If you are healthy, you should not have ANY damage to your villi! The intestines of healthy people are not damaged.

But your doctor, who will not agree with this conclusion, will tell you that you are "fine" and send you on your gluten-eating way while you continue to damage your villi and have 'unexplained' gastrointestinal symptoms.

Another reason that gluten intolerance gets missed is that doctors often use a“scratch test” for diagnosing gluten allergy. Gliadin, the protein in gluten to which people are allergic to, are scratched into the skin and the scratch is checked later. If it doesn’t get red and swollen, you are told that the test was negative. Again, unfortunately, unless you have a severe reaction, you will probably not set up a skin response to gliadin and you are told that you are 'fine'.

Additionally, the scratch test tests for an ALLERGY to gluten, not to a gastrointestinal autoimmune disease. Even those with Celiac Disease do not necessarily have a wheat allergy. They are entirely distinct and separate problems. Lack of a wheat ALLERGY is meaningless as to whether someone has Gluten Sensitivity or Celiac Disease.

How About Blood Tests?

Blood tests are another way of diagnosing gluten allergy. These blood tests check for antibodies to the gluten protein called gliadin.

At least two different studies comparing intestinal biopsies to antibody blood tests, found that when there was a large amount of intestinal damage, the Celiac Disease blood tests showed a high amount of antibodies in the blood.

However, intestinal biopsies that had a small to moderate amount of damage had 'negative' Celiac Disease blood antibody tests! This was considered "disappointing" to researchers in one study.

Disappointing to them, tragic to you!!

“.. patients in whom minimal [villous damage]
were found in the intestinal mucosa,
none of the [blood tests that check for
antibodies to gluten] was sufficiently accurate.”
‘Value of serological markers in the
diagnosis of celiac disease. A proposed protocol’

What if you have mild but persistent gastrointestinal symptoms, or simply a chronic illness that you suspect might be symptoms of gluten sensitivity?

What about genetic testing? Shouldn't that be a good way of diagnosing gluten allergy? Your genes 'make' who you are, don't they?

Diagnosing Gluten Allergy
Without Your Doctor

Diagnosing gluten allergy by yourself really should be the "gold standard" for gluten sensitivity. How do you go about doing this? It's easy.

Stop eating gluten for 60 to 90 days and see what happens!

It's really that simple. While it is that simple, it takes a certain amount of thought, planning, preparation and motivation. It can be a challenge at first, but once you've done the initial work, it's really a matter of just developing the 'habit' of gluten free eating. You can get started out the RIGHT way with the ONLY resources that I can recommend for Gluten Free Eating:

These are ONLY resources on gluten free eating that encourage changing your diet to HEALTHY foods in order to heal and repair the body.

In contrast, most other gluten free eating books only attempt to provide unhealthy, processed gluten free junk foods as a substitute for the gluten containing junk foods that most people consume. If you want to find out if you have gluten sensitivity, keep reading for details on how to find out with 100% accuracy!

Next --->
The Gluten Intolerance Diet

Ratio of calcium/.vit D/vit K and Magnesium
So I want to take magnesium doing LOTS of research I have to be deficient, what suffering all o fthe symptoms, drinking coffee, drinking lots of alcohol, …

2 Genes for Gluten Sensitivity
I will try to keep this as short as possible. For the last year and a half, I have been dealing with multiple vitamin deficiencies, including Vitamin D, …

Genetic test to rule out Celiac Disease?
My son tested negative on the blood test for Celiac's Disease. On one of our trips to the Urgent Care when my son thought he was going to pass out …

Celiac levels...
Are there different types of celiac diseases? I had some blood work done at my doctor's office and she said (in a written report) that I tested positive …

Enterolab vs. BEST Test for Gluten Sensitivity
I have Rheumatoid Arthritis and on an arthritis website somebody mentioned celiac disease. I sent a stool sample to Enterlab and they said yes I have …

Wondering If Celiac Diagnosis Is a Fad
Would any ole person who's eating gluten have blood test results that show high IGA? Is this a legitimate question? Or, would only someone with Celiac …

Blood Tests for Gluten
I have an acupuncture and enzyme nutrition practice in Ann Arbor MI. I routinely suggest that my patients get tested for gluten sensitivity/intolerance. …

Celiac Testing
How important is it to get a diagnosis when GI doctor just brushed it off. I am 70 and have been off wheat for 3 years, after discovering on my own …

Gluten Sensitivity Testing
I have noticed many symptoms over the past 2-3 years that had become worse, to where I sought medical help. I have felt like my pulse and blood pressure …

Back to Top of Diagnosing Gluten Allergy Page