Learn the Truth About
Villous Atrophy

If you are concerned about Villous Atrophy, you’ve come to the right place to not only find information on this serious health problem, but to also find out how you got it  and what to do to fix this problem of flattened intestinal villi as well. So, exactly what is villous atrophy?

It is when the microscopic cells lining the small intestinal tract, called ‘villi’ or ‘microvilli’, became damaged to such an extent that upon taking a biopsy, a doctor will look at these microscopic structures that are supposed to look something like the thousands of waving tentacles on a sea anemone, and instead of seeing individual little fingerlike projections, they will look at though they have become flattened or ‘atrophied’. By the time this process is noticeable on biopsy, it is the start of some MAJOR health problems, for a LOT of different reasons.

There MUST be inflammation present for the villi to begin to become damaged, and this inflammation leads to ‘leaky gut syndrome’ that is VERY real. The cells in the small intestine are, quite literally, only one cell thick and sit next to the one cell thick blood vessels called capillaries. This is an intricate function designed so that you could absorb the nutrients from your food directly from the villi into the bloodstream. Well, the spaces between these cells are called ‘Tight Junctions’ and these tight junctions, once they become inflamed, will begin to spread apart much like the bricks in an old wall do over time. When this happens, larger food molecules can begin to ‘leak’ through these tight junctions directly into the bloodstream leading to a problematic condition known as ‘leaky gut syndrome’, also called Increased Intestinal Permeability, which is What Causes Food Allergies and most autoimmune diseases. 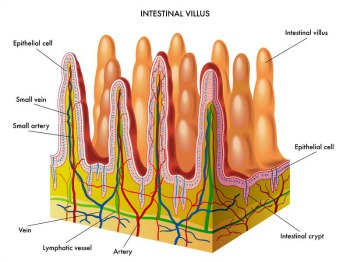 As this inflammation progresses and cells continue to be damaged, this leads to a breakdown of immune cells called “immunocytes” that are an amazingly important part of the first line of immunity in the body. This makes us susceptible to all kinds of infections, especially digestive tract infections such as the H Pylori Bacteria, Candida and C-difficile Infections, among others, which can lead to further subtle health problems that may or may not cause complaints with digestion. Many times, people only first notice the start of villous atrophy as subtle health problems like fatigue and joint pain, this often progresses to any of the many common autoimmune diseases or any range of ‘unexplained’ health problems such as Fibromyalgia and Chronic Fatigue Syndrome.

So what causes all of these problems? The main cause of this cascade of events that keeps making health worse and worse, is food sensitivities, and more specifically a sensitivity to wheat protein called Gluten Sensitivity. While all of this being caused from a food that you have probably eaten almost every day of your life sounds a little bit crazy, this is absolutely true, and all of this can happen EVEN IF you’ve been tested for the classic disease caused by problems with gluten called Celiac Disease and the test came back negative. Diagnosing Gluten Sensitivity is NOTORIOUSLY inaccurate and any negative test should be deemed inconclusive.


There are certainly other causes of villous atrophy, but for the vast majority of people, Gluten Sensitivity is the foremost cause of damaged intestinal villi, while untreated parasitic infections, other food sensitivities and poor eating habits are contributing factors. In reality, going on a gluten elimination diet is the most important thing that you can do to stop the damage, start to reverse the inflammation and get back on the road to healing. While you can ALSO get Intestinal Pathogen Testing to find and treat the ‘bugs’ that might be contributing to villous atrophy, that step must be IN ADDITION TO getting off of gluten and other processed and ‘non foods’ that contribute to inflammation. Healing the digestive tract can take as long as 6 months, and sometimes even longer when extensive damage has been done and infections have burrowed deep into the intestinal tract lining making deep infected pockets known as ‘crypts’.

Damage to the intestinal villi is a very serious condition, and I highly suggest that if you have Villous Atrophy, you read through some of the pages on Gluten Sensitivity and learn all you can about the problems that gluten can cause as well as getting the program The Healthy Urban Kitchen that will give you even more information on gluten and the latest research on nutrition, as well as giving you sample meal plans to get you started. Because once you learn about the problems that gluten can cause, you’ll realize that gluten sensitivity could be THE underlying cause of ALL of your health problems.

Back to the Top of Villous Atrophy