Vitamin D Deficiency Fatigue
Are You a Sufferer?

While certainly, Vitamin D deficiency is not the only cause of fatigue, and many conditions could be the culprit, with just a few other possibilities being: 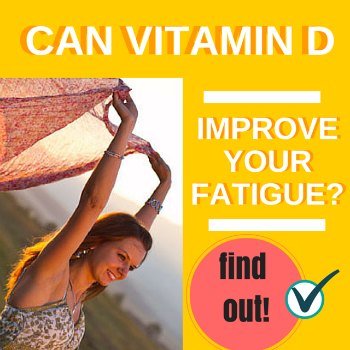 Vitamin D Deficiency Fatigue is so widespread that one study wanting to discover how many people actually suffered from this malady checked everyone from 10 years old to 65 years old who came into an emergency department complaining of fatigue, fibromyalgia, or depression.

They found that 93% of these patients had vitamin D deficiency(1).  Wow, 93% is incredible. It makes you wonder how many people suffering from fatigue of all kinds could just be suffering from Vitamin D Deficiency Fatigue!

In fact, there are many studies showing that fibromyalgia might even just be the fatigue and Pain of Vitamin D Deficiency!

Multiple other studies have reported similar findings in groups of patients suffering from fatigue along with various other ailments. (2) Particularly affected from fatigue seemed to be dark-skinned immigrants to countries in northern latitudes. No surprise there, yet no one bothers to check for vitamin D deficiency in those at risk.

But Does Vitamin D Improve Fatigue?

The answer to this question is more complex than just yes or no because different studies found different things.  However, the overall answer to whether Vitamin D can help fatigue is a resounding yes, especially from mine and the observations of other health practitioners who work with patients with fatigue; dramatic improvements can be seen, almost universally, when adequate vitamin d is given over a long enough period of time to bring up Vitamin D levels and sustain them for a period of time.


One study even found that a multivitamin containing vitamin d prevented fatigue in healthy volunteers exposed to rigorous multitasking. What an interesting finding. Unfortunately, most studies are done for a matter of weeks, and just give a particular dose of vitamin d without taking into consideration the vitamin d LEVELS of the participants. This is a problem because vitamin d is not a drug. We must have adequate blood levels of vitamin d to function properly, and just taking some random dose of vitamin d does not necessarily help to raise blood levels, especially in complex cases where someone has poor Vitamin D Absorption.

For instance, a study done on a group of fibromyalgia sufferers gave an adequate dose of Vitamin D, 50,000 IU’s per week, but only gave it for 8 weeks, and didn’t check blood levels afterwards. As a result, those with moderate vitamin D deficiency saw improvements in fatigue and pain, while those with severe vitamin d deficiency saw no improvements in the 8 week study period.(4)  When you understand the use of Vitamin D for Pain Relief and for fatigue, you’d know that those with the lowest vitamin D levels likely only brought their levels up to the same levels as those in the moderate deficiency group! It would not be expected they resolved their fatigue, because they were still Vitamin D deficient. Also, it might take up to 6 months after proper levels are achieved for symptoms like pain and fatigue to resolve. Vitamin D is not a drug, and this study was designed to test it like a drug- a sure recipe for failure.

Other studies, however, showed significant improvements in fatigue when vitamin D levels were increased (1) , sometimes to the point of seeing wheelchair bound disabled people get out of their wheelchairs and walk for the first time in many years! Since Vitamin D is intricately linked in muscular strength, these findings are to be expected, and one study even saw improvements in energy processes at the cellular level in vitamin d deficient people before and after taking vitamin D. (5)

Many ‘fatal flaws’ can be found in the studies that show no improvements in Vitamin D Fatigue; while well-designed studies by researchers who seem to understand how to work with vitamin D tend to show real-world improvements in quality of life of the subjects taking Vitamin D. (6)

Are you suffering from Vitamin D Fatigue? You’ll never know until you give Vitamin D a try.  But unless you follow the guidelines outlined on the Vitamin D Therapy page, you will almost certainly fail to have much benefit from taking Vitamin D. Most people don’t bother to get a level, then take an inadequate dosage, or eat  Vitamin D Foods in amounts insufficient to meet their Vitamin D Requirements,  while expecting to see magical results in a matter of days to weeks, then declare their experiment a failure when they don’t. Don’t let this happen to you. Follow the guidelines, do it right, and experience the benefits of vitamin d that are possible if you take care to follow instructions and do the Vitamin D Therapy correctly.

Low Vitamin D causing my fatigue?
My physician told me I have a level of 12.5 vitamin D and she put me on 50,000 units, 1 pill per week for three months. Why is my level so low? At times …

Is Being Constantly Tired Related to Vitamin D Deficiency
I had less than 4 ng/ml vitamin D in my blood test on May 2011. My doctor prescribed me 10,000 vitamin d3 4 one day yes and then no 4 the other day 4 the …

Extreme Fatigue From Vitamin D Deficiency
My husband had been feeling like a 90 year old (he's in his 40's) for about a year now, and after many different doctors, was tested for Vitamin D. His …

Chronic Fatigue and Vitamin D Deficiency
I found your site because I googled my Vitamin D levels. I have a level of 6. I have been diagnosed with Epstein Barr, Chronic Fatigue, possible MS, …

Leg Muscle Fatigue Due to Vitamin D Deficiency?
I used to walk up and down mountain roads with great speed even at the age of 65 right up to 2007. Then I got an ache in the left hamstring-- which was …

Chronic fatigue and Vitamin D
For the past 5 years I have been suffering from a Chronic Fatigue/fibromyalgia type illness. The main symptoms besides the fatigue are neuropathy in …

Tired and Fatigued all the Time from Vitamin D Deficiency
I have just got the results of my labs today and I have a vitamin d deficiency of 8.8 ng/ml. I have been put on prescription vitamin D and will be checked …

Relief of fatigue with Vitamin D
I went to my endocrinologist because I was having a lot of aches, stiff muscles in the morning and headaches that my other doctor could not explain- including …

Could my fatigue be from Vitamin D Deficiency?
I just found out that my Vitamin D blood level count 17 ng/ml. Can the Low Vitamin D Blood Level be the cause of chronic pain? I have also had multiple …

Vitamin D Deficiency and Fatigue
Can a Vitamin D deficiency cause fatigue?

Research for This Page

Back to Top of Vitamin D Deficiency Fatigue