The Causes of B12 Deficiency
Can Be Found and Fixed

One of the common causes of b12 deficiency is lack of eating animal products. This is a shame since so many don’t eat meat in order to improve their health. While being a vegan Absolutely Can improve your health, you MUST be vigilant about getting Vitamin B12 because there are simply no good sources of it outside of the animal kingdom.

Vegetarians claim that Chlorella and cultured foods are good sources of vitamin B12, but they only contain very small amounts of Vitamin B12. Most vegetarians are NOT eating these foods regularly. And if they are, they are not eating them in large enough quantities to make a difference. The Facts about Vitamin B12 show that Vegetarianism is very clearly one of the causes of b12 deficiency.

"The existence of clear-cut biochemical evidence of
perturbed vitamin B-12 metabolism in vegetarians and
the fact that hyperhomocysteinemia is a risk factor
for occlusive vascular diseases, some neural tube
defects, congenital heart defects, and dementia and
Alzheimer disease should spur even the most skeptical
vegetarian to efforts to reverse an easily
preventable dietary deficiency of vitamin B-12."
Vegetarianism and vitamin B-12 (cobalamin) deficiency

And a big part of the reason that vegans, for the most part, are healthy and most do not have apparent vitamin b12 deficiency is that the liver stores up to 3 years worth of vitamin b12! Taking the very tiny amounts present in vegetables may delay this for another year or two, but eventually vegans could become vitamin b12 deficient at some point and taking an inexpensive vitamin supplement as a Vitamin B12 Deficiency Treatment even once a month could entirely prevent these well-known causes of b12 deficiency. 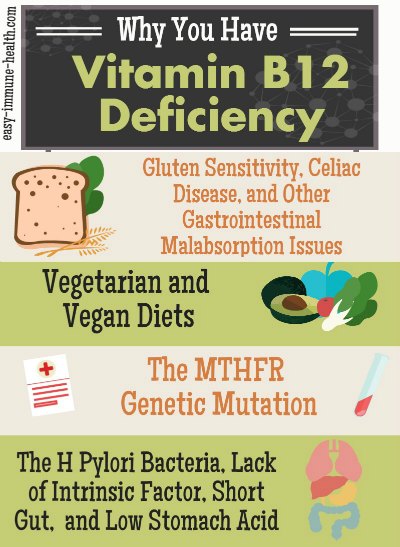 Along with low stomach acid levels, H pylori bacteria infection is actually one of the most common causes of b12 deficiency in people that there is no known reason for them to have vitamin b12 deficiency. The H pylori bacteria is the infection that causes stomach ulcers. It also causes a general inflammatory response that can lead to a condition known as Increased Intestinal Permeability or 'Leaky Gut Syndrome'.

"Helicobacter pylori seems to be a causative agent
in the development of adult vitamin B12 deficiency.
Eradication of H pylori infection alone may correct
vitamin B12 levels and improve anemia in this
subgroup of patients."
Helicobacter pylori—Is It a Novel
Causative Agent in Vitamin B12 Deficiency

This 'leaky gut' can cause both Vitamin D and Vitamin B12 Malabsorption. While doctors will absolutely dispute this correlation and will rarely test anyone for the H Pylori Bacteria that doesn't haveSEVERE stomach issues- the research is VERY clear that the H pylori bacteria is one of the causes of B12 deficiency.

If you would like to get tested for H Pylori Infection, there is an easy and painless In Home H Pylori Test that you can have mailed right to your home.

Some Drugs are
Causes of B12 Deficiency

One of the Causes of Vitamin B12 Deficiency that is little known and underappreciated as the large problem that it truly is, are the Side Effects of drugs such as:

These drugs often deplete Vitamin B12 slowly and over time, sometimes with disastrous results. The Mental Changes from B12 Deficiency that occur can be devastating for the patients and families who deteriorate weeks to months after a minor dental procedure or an intensive care unit stay.

However, most of the time, no one 'connects the dots' that the mental deterioration or new onset Peripheral Neuropathy was in any way related to the minor dental or medical procedure that was performed without any complications.

And because no one informs these patients that depletion of vitamin b12 is a problem and so they never inform their doctor and no one ever figures out that their worsening problems are simply due to vitamin b12 deficiency.

Decreased or absent stomach acid is another one of the causes of Vitamin B12 Deficiency from B12 Malabsorption that is not usually mentioned. And while this may seem like an obscure problem that you don't have to worry about, you would be SURPRISED at the number of people who have reduced stomach acid.

In fact, despite what your doctor will tell you, if you have heartburn or you take ANY antacid medications, then you probably have low stomach acid. While your doctor will tell you that you have Too Much Stomach Acid, this is complete nonsense. If you look at a chart of how much stomach acid people have from childhood to old age, you will see that stomach acid levels are highest in children and lowest in the elderly- with levels that gradually decline throughout life. 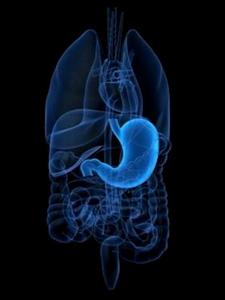 So, if it were true that too MUCH stomach acid makes you have heartburn, then children would be complaining of heartburn more frequently than the elderly. So, if you have or think that you have low vitamin b12 levels and you have any heartburn symptoms, then it is likely that you have one of two problems:

Both of which can cause low vitamin b12 levels and cause heartburn symptoms. But for symptoms of heartburn the question is more often NOT how to DECREASE stomach acid, but How to Increase Stomach Acid! While this sounds VERY counter-intuitive, you would be surprised that you can find relief from what SEEMS like too much acid by taking Hydrochloric Acid. You can take a Hydrochloric Acid Deficiency Test to find out if you might benefit from taking HCL Supplements.

Intestinal and gastric surgeries, including gastric bypass surgery is a major cause of vitamin b12 deficiency in those people that have had these surgeries. It is EXTREMELY common for these people to suffer from Peripheral Neuropathy or Mental Changes from B12 Deficiency- yet doctors still do not recommend that these patients routinely take multivitamin and mineral supplements to prevent these problems. Instead, they wait until their patients experience these devastating and painful problems before they give Vitamin B12 or Vitamin D.

Intrinsic Factor is a substance present in the stomach that allows Vitamin B12 to be absorbed. While doctors who diagnose people with vitamin b12 deficiency often claim that their patients have a lack of intrinsic factor and therefore need lifelong Vitamin B12 Shots, this is just simply not true- and while a Lack of Intrinsic factor IS one of theCauses of B12 Deficiency, it is much rarer than the other causes of vitamin B12 deficiency noted above.

For those that truly do have a lack of intrinsic factor, Vitamin B12 shots are unnecessary and come with some of their own Vitamin B12 Shot Problems that are best avoided. Despite your doctor telling you that you will need lifelong shots, the research shows that theSublingual Vitamin B12 Supplements are just as effective at correcting a Vitamin B12 deficiency.

The MTHFR Genetic Mutation is probably one of the most overlooked causes of Vitamin B12 Deficiency, often because lab testing doesn't even show a low vitamin b12 deficiency, but a normal or high Vitamin B12 Level.Unfortunately, this genetic mutation is extremely common and occurs in up to 33% of the population, but it's almost completely overlooked by traditional medicine despite the research on the genetic mutation being extensive and very clear that it causes serious problems.

So, Vitamin B12 Deficiency is a MUCH more common problem than is generally diagnosed, and many many people could benefit from Vitamin B12 Replacement- even those who have NORMAL Vitamin B12 levels. In general, the Causes of B12 Deficiency are able to be remedied by health practitioners who choose to actually LOOK for the cause.

If you are not sure why this is so important, keep reading to find out why the Symptoms of Vitamin B12 Deficiency are likely to go unnoticed in most people who have them…

Next --->
Vitamin B12 Deficiency Symptoms

Causes of B12 Deficiency Resources

Already Answered Questions about Vitamin B12

Click below to see already answered questions about Vitamin B12?

B12 low?
I'm hoping you can help me out. I have recently had some health issues over the last two years such as nauseau, dizziness as well as chronic headaches, …

My vitamin b12 Level is too high
My 10 year old son had some blood work repeated from when he was in the ER with chest pain. The second set was done 9 months later when he was completely …

Could it be Pernicious Anemia or would my B12 be lower?
I just got a b12 result of 207 back. I am going to my doctor next week to follow up with the lab. If I had Pernicious Anemia, would my b12 be closer to …

Male Infertility and B12
My husband has been diagnose with azoospermia, aka, he doesn't have a sperm count at all, however, when they did the TESA they found sperm and froze them. …

Back to Top of Causes of B12 Deficiency