What Causes Food Allergies? You might be surprised at some of the things that contribute to food allergies, and you'll not hear this from your doctor, so keep reading...

Food sensitivities have become quite a problem in recent decades with the incidence of SEVERE food allergies like those to peanuts and shellfish rising to an epidemic scale. Recently, even airplanes and elementary schools have declared themselves 'Peanut Free Zones' in order to protect those with these serious allergies.

While these obvious food allergies get a lot of attention because of their severity, the less obvious 'delayed sensitivity reactions'- such as the extremely common Gluten Sensitivity- are a serious problem for the hundreds of thousands who become exhausted, get joint pains, have 'brain fog' and other debilitating symptoms after a meal that contains an offending food.

In fact, these types of food sensitivities are even more of a problem because they go unrecognized in the vast majority of people who suffer from them, so most simply get diagnosed with vague illnesses like 'Chronic Fatigue' or 'Fibromyalgia' when part of their problems may simply be food sensitivities!

Infections in the Gut

The Helicobacter Pylori bacteria, most commonly known as H pylori, are ancient bacteria that have been infecting humans for as long as we have been on the earth. They are present in up to half of the world's population, according to some studies, and have been found in nearly every bodily fluid and every organ in the body- including dental plaque, brain plaque and the plaque caused from heart disease! They are have been found everywhere in us, but they are still a bit of a medical mystery because they only sometimes cause disease. 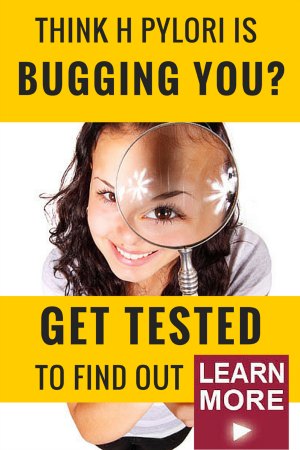 While they have become famous in recent years with the discovery that most ulcers are caused by an H pylori infection, most doctors pretty much ignore this bacteria UNLESS a person has active ulcers or has persistent unrelenting heartburn.

But doctors are missing an important connection with the recent rise in food sensitivities. Interestingly, research is showing that these two seemingly unrelated phenomena of the H Pylori Bacteria and food sensitivies are actually a cause and effect process of what causes food allergies.

Doctors only consider health issues to be Symptoms of H Pylori when the infected person has heartburn, ulcers, or persistent stomach pains. But whether H pylori causes these problems or not, it is an INFECTION, and infections always cause an immune reaction and inflammation, and this can be what causes food allergies. 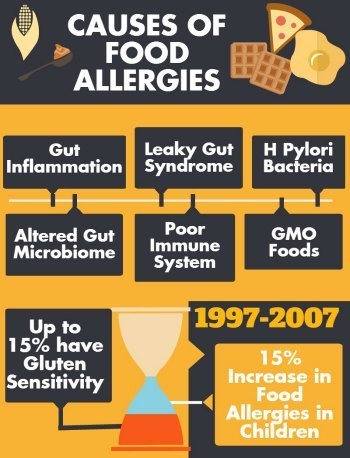 Unfortunately, many people with H pylori often don't have the 'classic' symptoms of heartburn or stomach pains that doctors are taught to recognize as H pylori infection, and even when they do, they are often simply given an 'acid blocker', with all of their inherent Side Effects of Acid Blockers, to relieve their Stomach Burning, leaving the H pylori infection to continue causing inflammatory damage that could lead to ulcers and even stomach cancer.

Inflammation is
What Causes Food Allergies

Inflammation from H pylori, other infections, food sensitivities, and as a result of stress causes the stomach and small-intestinal cells, which are usually tightly fitted like puzzle pieces, to become damaged and pulled apart leaving gaps and spaces in between- a condition called Increased Intestinal Permeability , also called 'Leaky Gut Syndrome'. In this case, it would more accurately be called increased gastric permeability, but it's the same thing.

"...this increased permeability to antigens
could be responsible for an allergic sensitization
to bystander food antigens occurring in some
patients who test positive for H. pylori."
'Food Allergy and Helicobacter Pylori'

While some tolerate this inflammation well and have no symptoms, some people will get food particles passing right through these leaky cells and into the bloodstream, which causes a whole body immune reaction to the protein molecules that pass through. And this systemic reaction is what causes food allergies in most people most of the time!

The Drugstore Puts You at Risk Too

Ironically, even seemingly 'safe' over-the-counter drugs are contributing to the rise of food allergies and autoimmune disease. Antibacterial Mouthwash seems to not only be safe, but good for you. Unfortunately, these oral hygiene agents not only kill 'bad' bacteria in the mouth, but Good Bacteria too. Some of these good bacteria in the mouth produce mucus that protects the stomach from bad bacteria.

One of the most common Side Effects of Tylenol is the creation of tiny holes in the gut leading to Increased Intestinal Permeability, and lets not even talk about the Side Effects of Aspirin. Aspirin is well-known to lead to bleeding in the stomach that, of course is caused by inflammation.

Additionally, the Side Effects of Omeprazole and other over-the-counter acid blockers... well, block acid. While that might seem like a good thing if you have heartburn, lowering the acid in the stomach is a bad idea that allows infections like H Pylori and C-Difficile to set up shop and create inflammation.

If you have food allergies and suspect that your symptoms may be due to H pylori, both blood testing and In-Home H Pylori Stool Testing are accurate and inexpensive ways to be tested for this common bacterium. In addition to standard medical treatments of antibiotics for 'eradication'of this infection, there are also effective natural remedies that can control and even eliminate this bacteria altogether, thus eliminating the underlying CAUSE of the food allergies- along with the inflammation and immune reaction that can masquerade as so many other chronic health problems like chronic fatigue syndrome, fibromyalgia and just plain fatigue and all over body pain.

If you think that you might have food allergies, see why, BY FAR, Gluten Sensitivity is the most common food allergy...

Next --->
Do YOU have Gluten Sensitivity

Back to Top of What Causes Food Allergies