A Low Cortisol Level
Makes You Do Dumb Things

Could a Low Cortisol Level be making you do dumb things? Cortisol is a hormone that is produced by the adrenal glands, and is responsible for functions such as creating other hormones and regulating energy levels. Most people have heard of Adrenal Gland Fatigue, and this is caused when cortisol levels are either too high or too low, but mostly when Cortisol Levels are low.

Actions such as overeating, staying up too late when you know you need to get to bed earlier, drinking too much coffee, or other compulsive or addictive behavior that you just KNOW that you should not do, but can’t seem to control, are ways that your body can actually raise cortisol levels. This is because the body sees these behaviors as stressful, and you produce cortisol.

Ironically, because your cortisol levels get to within normal range, you actually feel better, and thus it becomes a type of conditioned reward system, even though that system is acting in a way that harms you. So when you find yourself engaging in these apparently destructive and self-defeating behaviors, it might actually be your inherent body wisdom simply trying to raise cortisol levels!


How to Recognize
Low Cortisol Levels 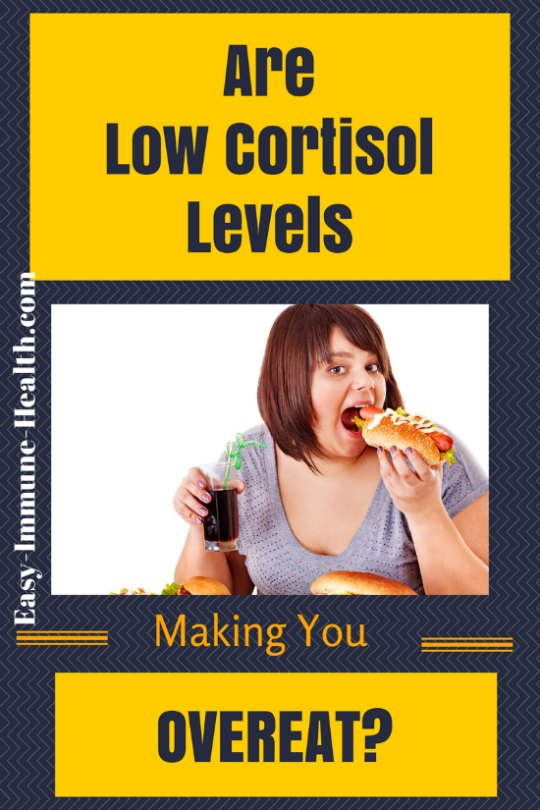 Cortisol levels fluctuate throughout the day and gradually decreasing until the late evening. This ‘diurnal rhythm’ has your AM Cortisol as the highest, with the lowest cortisol levels at night.

If you wake up not feeling refreshed, have energy ‘crashes’ in the middle of the day, lose energy towards the evening, stay up too late, don't get enough sleep, or find yourself engaging in destructive behaviors, particularly  at certain times of the day, these might be low cortisol symptoms and Adrenal Gland Fatigue. Fortunately, you can find out for sure, and you can also do something about it as well.

Fortunately for you, there is a Salivary Cortisol Test for high, normal, and low cortisol levels that is easy and accurate. It’s a simple in-home test that uses saliva taken 4 times in one day to test your adrenal cortisol levels throughout the day. This test also checks for the ‘anti aging’ hormone DHEA, as well as various other optional hormone levels such as testosterone, melatonin, estrogen, and progesterone.

This salivary adrenal test is painless, easy to use, inexpensive , requires no prescription, and is done in your own home at your convenience. The test has been used for over 30 years and is recognized by western medicine as being useful and accurate, despite the fact that almost no medical doctors use it.

In fact, the strange thing is that most doctors will not even recognize adrenal fatigue or low cortisol symptoms at all. They recognize only healthy normally functioning adrenal glands, and the complete absence of the ability to produce adrenal hormones, but they do not recognize nor will they test your cortisol levels.  Your doctor can do a test called a ‘cortisol stimulation test’, but this is a long and complex test that is only done in extreme circumstances where a complete cortisol deficiency is suspected. Few people have such low cortisol levels that they would qualify to even have this test done. Therefore, if you suspect you might have adrenal fatigue or low cortisol levels, you are relegated to testing yourself and paying out of pocket if you want to find out for sure.

Fortunately, as mentioned, getting tested for adrenal fatigue and low cortisol levels is easy, inexpensive, and painless. You can order an In Home Adrenal Test here and receive it in the mail in just a few days. It’s a sad state of affairs in medicine when your doctor will not test you for a common and treatable problem with an easy, painless and readily available test. Fortunately, however, you have the ability to take charge of your own health and get yourself tested without requiring the permission or help of a doctor.

Back to Top of Low Cortisol Levels