Which Polyunsaturated Oil
Is Best for Your Health

And this type of polyunsaturated oil does NOT have the same healthy profile as you get from Omega 3 Fatty Acids- and they are harmful to human health, as they have been unquestionably shown to be in many studies.

If you are interested in the Omega 3 Oils, you can see more about the Benefits Omega 3 Fatty Acids have on that page, but on this page we'll be discussing Omega 6 Oils exclusively. The so-called 'vegetable oils' in the form of polyunsaturated oil sound like they might be healthy since the idea of corn, safflower, and soybeans conjures up rows of vegetables and flowers growing in a field. But the polyunsaturated oil from these natural plants is anything BUT natural. These oils are to the original plants as white bread is to the original sheaves of wheat growing in the field.

Just because these oils start out as plants does not make them natural or healthy, even if they might say this on the bottle. What is VERY important to know about these oils is that they were never in the human diet until the past few decades. Even while the imagined Dangers of Saturated Fat are being touted by doctors and the government, these 'vegetable oil' that require the high technology of: 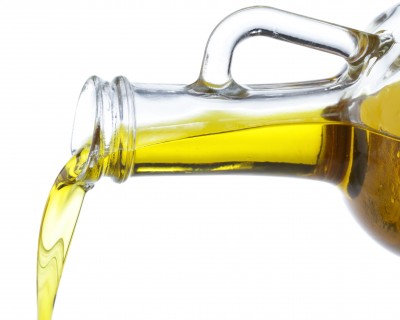 And probably a whole host of other high tech gadgets and chemicals in order to get the end product that ends up in a bottle on your grocery store shelf, were being 'pushed' as healthy. In addition, most of the oils that come from corn and soy start out as Genetically Modified (GMO) plants that have questionable health issues, as outlined in the book Seeds of Deception, before they even BEGIN to be turned into oils that are supposed to be 'healthier' for you than saturated fats.

The Truth About Polyunsaturated Oil

The truth about polyunsaturated oil is not so straightforward. Since these oils are new to the human food chain, we don’t have thousands of years of history, like we do with fish oils, olive oil and coconut oil, to know the long term effects that these oils might have on our bodies. For the safety and health benefits of other natural fats, we can look to traditional cultures who have eaten these foods for thousands of years, but we can't do that with Omega 6 Oils.

Unfortunately, the few studies that we DO have using these oils are NOT very favorable- despite the fact that governments are recommending them in place of 'dangerous' saturated fats that have been eaten safely by humans for tens of thousands of years. Finally, however, a recent study entitled Use of dietary linoleic acid for secondary prevention of coronary heart disease and death showed that substituting vegetable oil for saturated fat led to an INCREASE in death rates, surprising the heart disease 'experts'.

Animal studies are clear that corn oil and safflower oil promote cancer- particularly breast cancer. This is undisputed and because of these findings, many animal studies now use corn oil in order to purposely induce a condition known as 'oxidative stress' that can lead to all sorts of health problems.

Interestingly, the diets of these animals need only to contain a tiny 3% of calories to be supplied by these 'vegetable oils' in order to be cancer promoting- and this number has been repeated in many different studies. But humans are not animals and the question is whether these oils contribute to cancer or other chronic health problems when humans eat them- and in what amounts they are needed to be consumed in order to cause ill effects if there ARE any ill effects.

There have not been a large number of studies on humans that specifically study the effects of Omega 6 oils on health. Unfortunately, many studies only study the health effects of the amount of fat in the diet, and the studies that do take into account the type of fat that is eaten, usually did not distinguish between

Omega 3 polyunsaturated fat and Omega 6 polyunsaturated fat- lumping them both into the same category. The ones that DID look for Omega 6 oils specifically often used food questionnaires to find out what foods people were eating. But these food questionnaires often don’t take into account the small amounts of omega 6 oil that is in the vast majority of processed foods.

Another thing that we DO know about these polyunsaturated oils is that they convert into a substance called Arachidonic Acid in the body. Arachidonic Acid produces substances called PRO-inflammatory cytokines that act to INCREASE inflammation. Nearly every chronic health condition has inflammation as one of the underlying problems, and virtually everyone can benefit from decreasing inflammation, not increasing it.

What we DO know, however is that this study on The Incidence of Cancer in Men on a Diet High in Polyunsaturated Fat showed that men who consumed corn oil had more cancer deaths over an 8 year period than men who consumed olive oil. We also know that Japan has had rising breast cancer rates along with a rising use of vegetable oil.

However France has had little rise in their breast cancer rate while still consuming what we would consider an 'unhealthy' amount of saturated fats from animal sources. Yet the US's infatuation with 'healthy' vegetable oils has had an unexplainable rise in cancer despite most people eating ever decreasing levels of saturated fats as recommended by the government and the American Heart Association (as was still on their site at the time of this writing).

So, who is right? The heart association says that Polyunsatured Oil decreases cholesterol and so is 'heart healthy', but some studies are showing that those who have low cholesterol AND those who use Omega 6 oils have higher cancer rates!

And since there is no 'traditional' use of these highly processed foods, it seems sensible to NOT use these foods- even in TINY amounts- until long-term definitive human studies have been performed definitely showing that they are safe. And in the meantime there are some excellent Substitutes for Vegetable Oil that have LONG histories of safe and healthy human use- that also taste pretty good. So grab yourself some of the fats on the next page and make yourself a healthy salad or stir fry….

Next --->
Substitute for Vegetable Oil

Back to Top of Polyunsaturated Oil