With CoQ10 for Heart Failure study after study shows that the use of this commonly available fat-soluble antioxidant may show "Extraordinary Clinical Improvement" for even the sickest patients by repairing the Cause of Congestive Heart Failure. And while doctors almost never do a Blood Level of CoQ10, it is as simple as a blood test to see who might be able to use this super safe nutrient that gets glowing reviews from the researchers - as one of the treatments for heart failure

CoQ10 is an abbreviation for a nutrient called Coenzyme Q10- also called Ubiquinol and Ubiquinone. And because of these studies, CoQ10 for heart failure has been put to the test as a safe and effective helper treatment for the debilitation long-term problem of chronic Congestive Heart Failure and Cardiomyopathy. In fact, there is such a large amount of evidence for the use of CoQ10 and Heart Failure that studies show that including it as a part of Congestive Heart Failure Nutrition can:

amazing of themselves. In a scientific world where "clinically significant" means that the researchers were jumping for joy, stronger adjectives are rarely used. But in the case of CoQ10, some of the quotes are downright incredible. Keep reading to find these quotes scattered throughout this page.

"Therapy with CoQ10 can result in a profound
increase both in cardiac function and in the
quality of life of a failing cardiac patient.
Cardiomyopathy can be substantially, but not
solely, a consequence of a deficiency of CoQ10."
Biochemical rationale and myocardial
tissue data on the effective therapy of
cardiomyopathy with coenzyme Q10 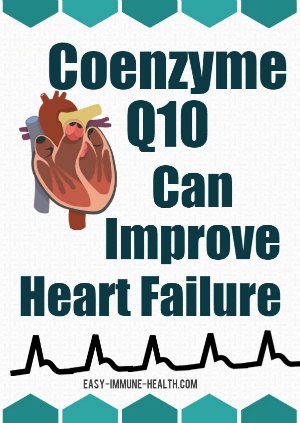 How Does Coenzyme Q10
For Heart Failure Work?

CoQ10 for Heart Failure works in two different ways. First, CoQ10 is a powerful fat soluble antioxidant; second, it is a regulator of the source of power, the mitochondria, inside each and every cell in the body- and especially of heart cells.

CoQ10, along with Alpha Lipoic Acid Supplements, are one of the most powerful antioxidants available. Antioxidants are an important force against heart failure. A lack of antioxidants have even been implicated in being one of the Causes of Heart Failure. Antioxidants neutralize substances called "free radicals" that are released into the body in response to stress and cause damage, premature aging and immune system dysfunction.

CoQ10, when it has been able to be measured in the heart cells themselves, has been shown to be significantly decreased in patients with heart failure. Worsening heart failure shows worsening CoQ10 deficiency and, conversely, as people are given CoQ10 for heart failure and their heart function improves, their heart cell levels of CoQ10 increase. These studies on CoQ10 levels in the heart have prompted researchers to believe that a deficiency of CoQ10 is one of the Causes of Heart Failure- and not just an incidental finding.

What Improvements Can Be Expected?

When CoQ10 for heart failure is given, it seems to help in many different ways. Heart Failure, also called Congestive Heart Failure, is a problem of a weaker and 'flabbier' heart muscle that becomes thickened and enlarged. These changes don't allow the heart pumping action to be as effective, and this leads to weakness, disability and the 'Hallmark' sign of congestive heart failure- shortness of breath from plasma backing up into the lungs.

This emergency condition is often called 'Water on the Lungs' and is a major problem for people with heart failure and requires them to take diuretic 'water pills' that deplete magnesium and potassium that contribute to the high rates of Congestive Heart Failure Death rates and the high incidence of an abnormal heart rhythm called Atrial Fibrillation that occurs.

But CoQ10 for heart failure seems to actually be able to fix these problems from many angles and there are few to no CoQ10 Side Effects to worry about.

While an improved ejection fraction is great in and of itself. That also translates into a CLINICALLY important marker of something called Cardiac Output- which is the amount of blood that gets pumped through the body every minute. And an increased cardiac output is what is really important because it keeps the blood plasma from backing up into the lungs and it allows the person to do normal activities without becoming fatigued and short of breath.

The heart of those with congestive heart failure are often much thicker than normal. This extra thickness makes the heart muscle less flexible- and a less flexible muscle makes it more difficult to pump blood and creates a lower ejection fraction like we talked about in the section above.

One of the amazing things about CoQ10 for heart failure is that it seems to be able to decrease the death rate from heart failure. AndCongestive Heart Failure Death is a really big problem with very high death rates.

"These patients, steadily worsening and expected
to die within 2 years under conventional therapy,
generally showed an extraordinary clinical improvement,
indicating that CoQ1o therapy might extend
the lives of such patients."
Response of patients in classes III and IV of cardiomyopathy to therapy in a blind and crossover trial with coenzyme Q10

The improved cardiac function and pronounced
increase of survival show that therapy
with CoQ10 is remarkably beneficial due to
correction of CoQ10 deficiency..."
Pronounced increase of survival of patients
with cardiomyopathy when treated with
coenzyme Q10 and conventional therapy

Yet, despite all of these "Remarkable" findings, and the fact that these studies have shown High Absorption Coenzyme Q-10 Supplements to be amazingly safe as well, doctors virtually NEVER check CoQ10 levels nor do they give or even recommend CoQ10 or any other form of Congestive Heart Failure Nutrition for this extraordinarily debilitating disease. Not only are many people not even able to climb a flight of steps without shortness of breath, but 75% of people with a low ejection fraction can be expected to die in 2 years- and the ones that do live remain fearful of the high rates of Congestive Heart Failure Sudden Death. And whileCoQ10 for Heart Failure has been shown to improve those odds and be safe at the same time, doctors choose dangerous drugs that deplete electrolytes and actually contribute to early death.

Keep reading to see what OTHER nutrient deficiencies that doctors don't tell you are some of the Causes of Congestive Heart Failure.

Next --->
Causes of Heart Failure

Low pulse rate
I recently had a 24 hour holter monitor test done.It showed that I have PAC & a few PVC arrhymias.My doctor said since I only had about 1400 in a 24 hour …

CO Q10 Dosages
I currently take 100mg of CO Q10 Ubiquinol three times daily along with the Beta Blockers & Ace Inhibitors prescribed by my doctor. It has been about …

How many milligrams of CoQ10 per day for Heart Problems?
My ejection fraction is down to 20 to 25 percent according to my last echocardiogram. I do have most of the problems mentioned, "stair climbing especially" …

Back to Top of CoQ10 for Heart Failure