These are not 5 Fibromyalgia Tips for better living with Fibromyalgia, but SOLUTIONS for the pain, fatigue and other Symptoms of Fibromyalgia that you might be experiencing.

The ONLY way that you can be sure that your Fibromyalgia pain is NOT due to vitamin d deficiency is to get a vitamin d level and to get bring it up to the researcher recommended 'Optimal' levels as outlined on the Vitamin D Levels page. Then after levels are optimal, to continue to KEEP your levels in the optimal range by meeting your daily Vitamin D Requirements for at least 4 to 6 months- the time that it has been shown to take to repair the muscle weakness and nerve issues that can occur with vitamin d deficiency.

Vitamin D and magnesium are the most important Fibromyalgia Supplements that you can take. Magnesium should also ALWAYS be taken with your vitamin d. The majority of Side Effects of Vitamin D are actually due to a provoked magnesium deficiency from the conversion of vitamin d into it's active form in the blood.

But Fibromyalgia and Magnesium have an incredibly strong connection even without adding vitamin d in the mix. It can help to:

There are some researchers who even believe that part of the pain of fibromyalgia is due to 'subclinical' continual muscular spasms throughout the body CAUSED by magnesium deficiency!

But don't rely on your doctor checking your level. Blood Magnesium Levels are practically worthless information and should not be relied upon. Relying on symptoms (such as symptoms of fibromyalgia) is a much better way to determine your need for magnesium. See the Fibromyalgia and Magnesium page for more detailed information on this ESSENTIAL Fibromyalgia supplement!

This is one of the Fibromyalgia Tips that you are not likely to hear in many places. There was ONE small study of only 4 fibromyalgia sufferers  that eliminated artificial sweeteners and MSG.

3 of the 4 Fibromyalgia patients had complete elimination of their symptoms and one had significant relief. While no further studies have been done on this, wouldn't you feel dumb if 5 years from now, conclusive studies showed that excitotoxins were a significant Fibromyalgia Cause and you could have not suffered from fibromyalgia pain for 5 years? 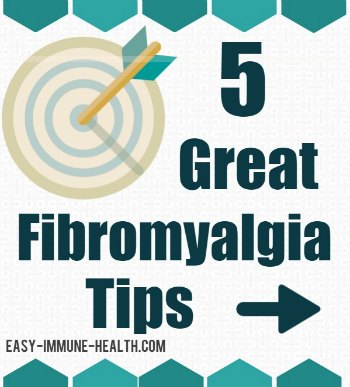 In the book, Excitotoxins: The Taste That Kills, Dr. Russell Blaylock has linked these substances to conditions like Heart Palpitations and neurologic problems. Aspartame Side Effects have been reported to be devastating and to cause many of the widespread symptoms that seem to be similar or identical to Fibromyalgia.

One of the biggest problems in Fibromyalgia are sleep pattern disturbances. Researchers were actually able to INDUCE fibromyalgia in healthy volunteers through sleep deprivation. So, getting sleep should be #1 priority for you. Exposing yourself to early morning sunlight could help greatly with this.

Sunlight has been villified as a bad guy by dermatologists and so we humans, who are designed to get lots of sunlight, have insulated ourselves indoors and almost never get outside. When you don't get outside, then electric lights make it ALWAYS daytime to your body clock- and this could be a problem for you.

In the book The Healing Sun: Sunlight and Health in the 21st Century the author discusses the work of two different doctors in the early 19th Century who were both running healing centers for incurable illnesses. Both doctors were healing their patients primarily using healthy food and water- and intense sunlight therapy.

Neither doctor knew of each other's work, yet both came to the conclusion that the patients who had the best recoveries, exposed themselves to early early morning sunlight. This is interesting because it removes the Vitamin D Factor out of the the equation because ou don't get vitamin d that early in the morning. But getting sunlight extremely early in the morning may 'reset' your body clock and adrenal gland hormonal rhythms every day.

Tip #5: Turn Off the Lights at Night

Fibromyalgia tips to reset your body clock. This on is the 'bookend' to Tip #4- every evening after the sun goes down, dim the lights in the house and minimize the number of bright or electronic devices that are on- such as the TV or the computer. Major health problems such as breast cancer, and chronic conditions like sleep disturbances can be traced to exposure to electric lights at night.

And get outside and expose yourself to the moonlight. Not only are humans governed by sunlight, but we are governed by moonlight as well. Many will think that this is 'woo-woo' or 'New Age', but no matter how advanced humans have become, we still are ruled by natural phenomenon. And for those who are out-of-synch with their daily rhythms and who have trouble sleeping because of it- you MUST get back into the rhythm that your body was intended to be in. And that is going to bed early and getting up soon after the sun comes up, as humans have done since the beginnings of our existence.

Back to Top of Fibromyalgia Tips