Magnesium In Pregnancy
How Important is it?

Is it safe to take Magnesium in Pregnancy? The answer is not an easy yes or no question. But here are the facts and you can decide what is right for you to do. Taking a look at the Magnesium Dosage page, you'll see that the RDA of magnesium for women is approximately 300 mg per day.

But the need for magnesium in pregnancy increases due to:

Unfortunately, most people do not even meet their basic needs, let alone the needs of going through pregnancy. At least one study (1) shows that the majority of pregnant women only get about a third of this MINIMUM need in food- this does not even include the additional need for magnesium due to the pregnancy and does not take into account your individual need for magnesium. In addition, most of the western world is at least mildly magnesium deficient, with entire swaths of the population actually experiencing subtle Signs of Magnesium Deficiency on a day-to-day basis without even being aware of it! 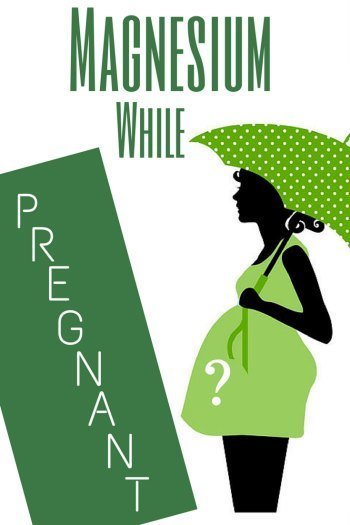 The most obvious and severe symptom of deficiency of magnesium in pregnancy is the HUGE problem of preeclampsia or eclampsia- also known as 'Toxemia of Pregnancy'. About 7% of pregnant women end up diagnosed with eclampsia or preeclampsia. The symptoms of swelling in the legs, fatigue and sometimes dangerously high blood pressure can range from a mild annoyance to a deadly problem that forces you to have an emergency induced labor, a ruptured placenta or even a stroke!

This is NOT a small problem.

While women with the early form of this problem just 'get watched' by the medical profession, the women whose symptoms are severe enough to go to the hospital will immediately get an infusion of magnesium to bring the blood pressure down and relax the uterus. Because this treatment is so effective and so safe, it makes one wonder why doctors don't treat this problem with sufficient magnesium when it's first recognized.

Well, others have wondered this too. Dr. Johnathan Wright says,

"Pyridoxine and magnesium therapy in toxemia… reduce the
elevated blood pressure and edema
before the problem becomes critical. Of course,
started early enough, prevention of the problem
is accomplished, and treatment of the actual
condition isn't necessary. So…. Why is there more
than a miniscule incidence of eclampsia and preeclampsia?"
From Dr. Wright's Book of Nutritional Therapy:
Real-Life Lessons in Medicine Without Drugs

deficiency- and a LATE sign. Earlier signs of the problem start with the EXTREMELY common pregnancy problems of:

Magnesium is like a natural relaxant, and so deficiencies can cause muscular and neurologic irritability; being sufficient can help everything to relax. While not ALL of these problems are due to magnesium deficiency, many of them are and could have been prevented with adequate magnesium intake during pregnancy. But how much should you get?

Not Getting Enough
Magnesium in Pregnancy

This adds up to a deficit of about 3000 mg every month during pregnancy! That's 27,000 milligrams that most women are short by the time they deliver even if they are only 100 mg short per DAY!

But most women are going to need MORE THAN 300 mg of magnesium in pregnancy due to their higher needs. If you imagine that many women have a 200 mg per day deficit, that is over 50,000 milligrams in deficit over your pregnancy- some women who have had lower intakes of magnesium during the first trimester due to morning sickness or excessive vomiting may be in an even WORSE deficit than that!

It's no WONDER that toxemia is such a big problem.

Getting Magnesium from Food

So, should you take more than what's in your multivitamin? That's a good question. Ideally, your first choice will be to increase the amount of foods that have magnesium in them in the first place. Vegetables, nuts, seeds and whole grains all have magnesium and if you are not eating many of these- then you SHOULD start.

Whether they have magnesium or not, these foods should be the MAINSTAY of your diet. If you are eating ANY processed foods whatsoever, you are shortchanging your nutrition and you should read the SEMINAL work of Dr. Weston Price entitled Nutrition and Physical Degeneration. It should be REQUIRED reading for all women who are pregnant or thinking about becoming pregnant. It is an INVALUABLEstudy on the risks to your baby of eating processed foods- information that you will hear from no one else!

But back to magnesium.

So, getting magnesium in your food is of PRIMARY importance. But if you are already eating plenty of magnesium rich foods and you are still having magnesium deficiency symptoms, should you take supplements as well?

Magnesium's Effects on the Baby

The studies on magnesium in pregnancy either show no benefit or a positive benefit from taking magnesium. I have seen NONE that show harm from a mother taking extra magnesium during pregnancy.And here are some of the benefits to the baby that magnesium has shown in studies

Other studies have shown that giving magnesium in pregnancy, just like Vitamin D in Pregnancy, leads to higher birth weights, a decrease in the incidence of premature birth and cerebral palsy - and, when magnesium is given to babies who have undergone traumatic births, they have fewer neurologic problems as well!!

So, there seem to be quite a number of positive reasons to be magnesium sufficient during pregnancy, but are supplements safe?

Is Supplementing Magnesium in Pregnancy Safe?

Magnesium supplementation, even intravenously, have been used safely in hospitals for decades to treat toxemia and pre-term labor. And except in the EXTREMELY RARE case of hospital negligence leading to a Magnesium Overdose, tens of thousands of hospitals use it regularly with virtually ZERO reports of harm to the mother or the baby.

Dosages of supplementation for studies ranged from the standard 100 mg of magnesium per day to one (3) that gave 360 mg per day. Unfortunately, few studies gave higher dosages than this and the vast majority were done only in the second and third trimesters. So, if you have higher magnesium needs and lower dosages are not enough to relieve your Symptoms of Magnesium Deficiency, should you take higher dosages and/or take magnesium supplementation in the first trimester or if trying to get pregnant?

There are no DEFINITE answers to this question. But Dr. Carolyn Dean, in her book The Magnesium Miracle reminds us that women were given Epsom Salt Baths (which are magnesium) to relieve pregnancy symptoms for generations and says,

"Always check with your obstetrician…
before adding any supplement, but know
that magnesium has a long history of safety
for both mother and child."
"The Magnesium Miracle"

While these answers might not tell you exactly how much Magnesium in Pregnancy you can take or whether you can take more than 360 mg per day in the first trimester, this SHOULD give the vast majority of you a good guideline about the safety of magnesium and the MAJOR benefits that it could have for you AND for your baby while you are pregnant.

And since you are concerned about getting enough magnesium in pregnancy, have you thought about your need for Vitamin B12 in Pregnancy, or your  Vitamin D in Pregnancy? Most women believe that they get enough of these vitamins, particularly vitamin D, in their prenatal vitamins so they don't have to worry about their vitamin d intake. But are you so sure? Keep reading to find out why you probably need AT LEAST 10 Times more than the amount that is in your multivitamin...

Research for This Page

Back to Top of Magnesium in Pregnancy