A Calcium Overdose
Isn't as Easy as it Sounds

Having a high blood calcium level isn't normal, but it's rarely due to a Calcium Overdose- and getting calcium toxicity from taking excess calcium only occurs under very specific circumstances which almost never happens except in people who are elderly or who have a lot of other serious health problems. If you have an Elevated Calcium Level, then please go to that page to learn more because having a high blood calcium level has much much more to do with 'metabolic' problems, in most cases, than it has to do with taking too much calcium...

A calcium overdose, more often called 'Milk Alkali Syndrome' is a dangerous, but rare occurrence whose strange name tells you a little bit about what causes this problem.

Milk alkali syndrome got its name because people who were diagnosed usually had been drinking large amounts of milk products while taking calcium-containing antacids, which are alkaline, for symptom relief of stomach pain usually due to ulcers- hence the name milk alkali syndrome.

But since we now have pharmaceutical 'acid blockers' that don't contain calcium, as well as other treatments for the H Pylori Bacteria that causes ulcers, milk alkali syndrome is rarely seen anymore.

The Kind of Calcium is Important
For a Calcium Overdose

Calcium overdose, while quite rare, can and does occur in people taking too much calcium carbonate and who generally have other health problems. Do notice that I said 'Calcium Carbonate' and not simply 'Calcium Supplements'. Remember that the milk alkali syndrome occurs because of an acid neutralizing substance- an alkali- along with too much calcium. Calcium CARBONATE supplements, specifically, is an acid neutralizing alkali which is why it is used in over the counter 'Antacid' tablets and why it can contribute to calcium toxicity.

Calcium citrate supplements contain Acid in the form of citric acid; while other calcium supplements such as calcium amino acid chelates have a neutral pH and are much less likely to contribute to milk alkali syndrome. But taking high doses of calcium supplements along with other substances such as baking soda and the newly popular 'Alkaline Water' could also contribute to an overall alkaline state setting up the conditions necessary to develop a calcium overdose.

What if you have high blood calcium?

While milk alkali syndrome DOES cause high Blood Calcium Levels, if you HAVE a high blood calcium level and take calcium, it is probably NOT because you are taking too much calcium, but because you have a medical problem. While you should STOP taking your calcium until a doctor has found the reason why you have a high blood calcium level, you should read the page on Elevated Calcium Levels to see why your high level is almost surely NOT caused from the calcium that you are taking.

When you take too much calcium

When you take too much calcium just once, probably absolutely nothing will happen. But if you take too much calcium over a long period of time, the more likely outcome will be a slow progressive of heart disease! Calcium supplementation, while common for women thinking they want to prevent osteoporosis, are more likely to give themselves heart disease, not prevent bone loss. For those who want to prevent osteoporosis, taking the correct Magnesium Dosage and getting a Normal Vitamin D Level are far more important for bone health. 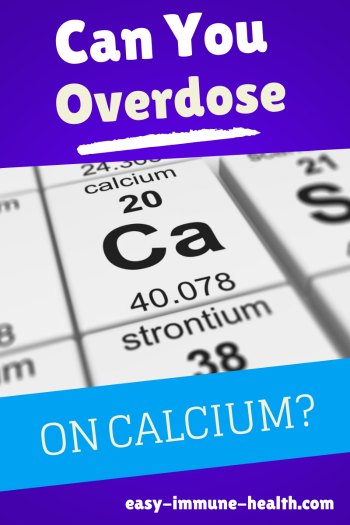 Again, this is an extremely rare occurrence that has become ever rarer now that the preferred form of antacids for most people is the prescription 'Proton Pump Inhibitors' that do not contribute to alkalinity like Calcium Carbonate does. While calcium toxicity is rare, it doesn't mean that you SHOULD take large doses of calcium. Excess calcium has its downsides and may be one of the Causes of Kidney Stones and has also been linked to an increase in prostate cancer.

This is besides the fact that most people are taking calcium to protect their bones, when calcium is NOT the most important ingredient in bone health. In fact, westerners ALREADY get the most amount of calcium of almost any country, yet have the HIGHEST rates of osteoporosis.

If you are concerned about your bones, it's the lack of Magnesium and Vitamin D that are causing more problems than the fictitious lack of calcium. You see, magnesium and vitamin D allow calcium to be ABSORBED- which is why it's CRITICAL to take Calcium With Magnesium- but it's vitamin D and magnesium that are SEVERELY deficient in westerner's diets, NOT calcium. But if you 'think' that you get enough vitamin d- think again! Keep reading to find out what researchers recommend as a daily Vitamin D Dosage. Hint: It's probably WAY more than you are taking now…

Back to top of Calcium Overdose

Research for this page