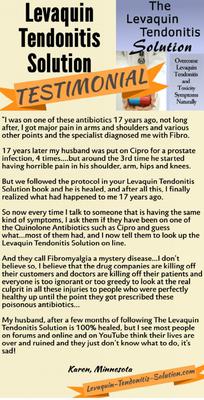 My question is ...Don't you think that doctors should be asking these people with Fibromyalgia if they had been on a fluoroquinolone antibiotic at some time before their diagnosis? I was on one of these antibiotics back 17 years ago, not long after the prescription was done with, I got major pain in arms and shoulders and various other points in my body.. A specialist doctor in rheumatology diagnosed me with Fibro. My feet and toes became numb and tingly with some pain and I was diagnosed with peripheral neuropathy....


Now 17 years later my husband was put on Cipro for a prostate infection, 4 times....but around the 3rd time he started having the horrible shoulder and arm pain and also hips and knees. Then his eyes became painful and he had floaters and was put on Pred Forte...

Anyway after research we realized that the antibiotic was the cause. Of course by then he had 2 cortizone shots and was diagnosed with a torn rotator cuff....he woke up with these injuries, he didn't cause them.

But we followed the protocol in your Levaquin Tendonitis Solution book and he is healed, and after all this, I finally realized what had happened to me 17 years ago. And funny but the FDA just came out with a new Black Box Warning about the nerve damage, such as Peripheral Neuropathy, so now I know what caused my major pain way back then, both the Fibromyalgia and the peripheral neuropathy.


So now every time I talk to someone that is having the same kind of symptoms, that their doctor can't seem to figure out, I ask them if they have been on one of the Quinolone Antibiotics such as Cipro and guess what...most of them had been and I now tell them to look up the Levaquin Tendonitis Solution on line. I really believe these antibiotics played a major part in the death of both of my parents. And now my husbands sister, after having been on Cipro twice, is in hospice with so much pain in her legs and now congestive heart failure..We warned her kids not to let the doctors give her Cipro, but they didn't listen...

So I say "Guns don't kill people, doctors do!" They just won't look back and figure out that all these horrific symptoms started at some point in time, after their patient had been on one of these antibiotics, even if it were months later. And they call Fibromyalgia a mystery disease...I don't believe so, I believe that the drug companies are killing off their customers and doctors are killing off their patients and everyone is too ignorant or too greedy to look at the real culprit in all these injuries to people who were perfectly healthy up until the point they got prescribed these poisonous antibiotics...

Sorry this was so long, but I think everyone with a new mystery illness, that happens out of the blue, should be asked if they had, in the past several months, been on an antibiotic, before all these injuries appeared...

My husband's orthopedic surgeon, who was going to operate on his torn rotator cuff, said to me.."Wow, now you are educating me, I am on Cipro right now!" I said, "you better do some research and you will see what we are talking about" And I asked him if he operated on my husband wouldn't he be doing more damage to his tendons and ligaments, since the damage was done at the cellular level? And he said YES! and that he had lots of patients who decided not to have the surgery and did just fine, so we walked out and never looked back and my husband, after a few months of following The Levaquin Tendonitis Solution is 100% healed, but I see most people on forums and online and on YouTube think their lives are over and ruined and they just don't know what to do, it's sad!
So that's our story and we're sticking to it...